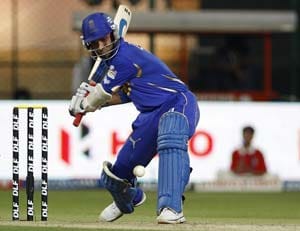 There was a look of satisfaction on Rahul Dravid's face when he won the toss, and that stayed with him throughout Rajasthan Royals' game against Kings XI Punjab at Punjab Cricket Association stadium in Mohali on Friday (May 9). And why not, because Rajasthan hardly broke sweat on their way to a crushing eight-wicket win to reclaim the second spot in the Pepsi Indian Premier League 2013 standings.

The win was set up primarily by Kevon Cooper, whose three wickets decelerated Punjab's innings at a time when a total in excess of 160 looked likely. That spark rubbed off on Ajinkya Rahane (59 not out) who continued in his rich vein of form to register his third consecutive fifty as Rajasthan breezed past the Punjab score of 145 for 6 with one over to spare.

Punjab didn't do their chances any harm when Adam Gilchrist and Shaun Marsh set things up with a 102-run stand for the second wicket. Marsh (77 in 64 balls) scored more than half the team's total, but losing wickets in a cluster at the other end meant accelerating towards the death was always going to be difficult.

Gilchrist, who had dropped himself owing to poor form earlier in the tournament, returned after three games and immediately made an impact in the Power Play overs.

A potential controversy was averted in the third over when Ajit Chandila appealed for run out with Gilchrist stranded out of his crease after having taken evasive action. However, Dravid quickly doused the excitement that could have led to some unpleasantness.

Gilchrist, with a 32-ball 42, put the incident behind him and looked like a man on a mission while Marsh played himself in superbly, but the final onslaught never came despite the explosive David Hussey and David Miller waiting for their chance.

Credit for that should go to Cooper, who used his subtle variations to deceive the batsmen, picking up three prized scalps - Gilchrist, Marsh and Miller (8) - at crucial stages of the innings.

Bipul Sharma, the left-arm spinner playing his first game of IPL VI, gave Punjab a dream start when he dismissed Dravid (4) in the second over.

But from there, it was one-way traffic as Rajasthan timed their chase to perfection. Rahane was dazzling, playing shots that his captain would certainly approve of. The one that particularly caught the eye was an inside out stroke off Piyush Chawla that sailed over deep extra cover.

With the asking rate never a bother, Rahane adjusted his game and took his team home in the company of Sanju Samson (47 not out), who also displayed, again, a great level of maturity. An emphatic pulled six off Manpreet Gony summed up his level of confidence and it was fitting that he also scored the winning runs.

Their ninth win in 13 matches ensured Rajasthan had a foot in the playoffs, while for Punjab, the climb towards the playoffs just got tougher with each of their four games from here on reduced to must-win affairs.

Comments
Topics mentioned in this article
Cricket IPL 2013 Adam Gilchrist Rahul Dravid Yuvraj Singh Shane Watson Kevon Cooper Sreesanth Ajinkya Rahane David Miller Rajasthan Royals Kings XI Punjab
Get the latest updates on India vs Australia Series, check out the India vs Australia Schedule for 2020-21 and Ind vs Aus live score . Like us on Facebook or follow us on Twitter for more sports updates. You can also download the NDTV Cricket app for Android or iOS.