IPL 6: Kings XI Punjab can win 5 out of next 6 matches: David Hussey 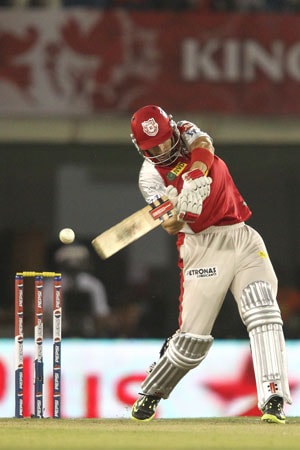 Their road to the next level has become much stiffer after Thursday's defeat but Kings XI Punjab batsman David Hussey asserted that they can win next five of the six matches to qualify for the knock-out stage.

"It is disappointing to come to press conference when you again lose a match like this in a run chase. Looking at it, I must say that our batting will go from strength to strength. It is a young team and six more matches to come and we can win five out of six," Hussey said.

"I think nine wins in the league will help you to go through the semis. I think our team is young enough and enthusiastic and we can do achieve."

The Australian also defended the young Indian players, who have not much contribution this season.

"Last year we had Mandeep singh as the young player of the tournament. I am sure he would like to score more runs as well. Our bowlers too have been contributing to the team and its success.Â  Nitni last year wasÂ  sensational. Manpreet Singh has not bowled as well he could though a bit disappointing any very, one ball tonight. All the indians are contributing."

Asked how what he thinks went wrong for them despite dismissing dangerous Mahendra Singh Dhoni early, Hussey said pointed out death overs bowling.

"I thought our death bowling was poor tonight. CSK bowled the death overs well by executing their yorkers and slow balls. Something we have to work on. The difference between a good team and great team are there I believe. I am pretty happy that Dhoni missed out today and my brother missed there too, the two good players in the competition," he said.

Comments
Topics mentioned in this article
Cricket Yuvraj Singh IPL 2013 David Hussey Chennai Super Kings Kings XI Punjab
Get the latest updates on ICC T20 Worldcup 2022 and CWG 2022 check out the Schedule, Live Score and Medals Tally. Like us on Facebook or follow us on Twitter for more sports updates. You can also download the NDTV Cricket app for Android or iOS.