RCB did have a few hiccups losing Tillakratne Dilshan, Virat Kohli and AB De Villiers in quick succession as Shane Watson struck twice and James Faulkner once to give Rajasthan some hope. Saurabh Tiwary and Chris Gayle though gave the home side a comfortable win scoring 25 and 49 respectively. 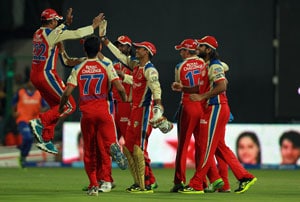 There was modest individual success but no happy homecoming for Rahul Dravid on what was an eminently forgettable night.

The M Chinnaswamy Stadium, packed to the rafters, rose as one to welcome one of Bangalore's favourite cricketing sons on Saturday (April 20) night, threatening to bring the roof down with the kind of reception Dravid hasn't received at the venue when playing for Royal Challengers Bangalore, Karnataka or even India. The Rajasthan Royals captain responded in style with a typically stylish innings, threatening to make a fist of it alongside Stuart Binny, another prodigal son, before the wheels completely came off when Dravid was caught trying to clear long-on off the bowling of Murali Kartik. (Match in pics)

Handily placed for a final push at 97 for 3 midway through the 15th over, Rajasthan collapsed in sensational fashion in the face of disciplined pace bowling from Bangalore - who didn't concede a single extra - as they lost their last seven wickets for just 20 runs in 31 deliveries to be bowled out for 117. It was Rajasthan's lowest total of Pepsi IPL 2013 and the first time in six games that they had failed to bat out their quota of overs. It was a far from adequate total on an excellent batting strip, and so it proved as Bangalore cruised home by seven wickets after racing to 123 for 3. (Scorecentre)

Bangalore's fifth win in as many games at a ground that has become their fortress this season catapulted them from fourth place to the top of the league standings with 10 points from seven games. (Statistical highlights: Vinay Kumar takes the purple cap)

Tillakaratne Dilshan, back in the side, provided the early thrust alongside Chris Gayle, subdued through the duration of his innings. Dravid set attacking fields with an eye on taking wickets but Dilshan peppered the on-side boundary, taking a special liking to Shaun Tait's express pace. The pair put on 53 in only 40 deliveries when Shane Watson, bowling for the first time in the competition, struck paydirt with his fourth delivery, having Dilshan caught behind. Virat Kohli and AB de Villiers came and went in a trice to create some articificial excitement, but with Gayle around, Bangalore were never under any serious threat. Saurabh Tiwary, making a comeback, took his time finding his feet, but he and Gayle added 59 for the fourth wicket to see the team home. (Watch: Match analysis)

It's no exaggeration to say that Rajasthan fairly handed the game over on a platter to Bangalore with an inexplicably abject surrender in the wake of Dravid's dismissal. The night had begun with plenty of promise, Watson whipping the first ball from Ravi Pampaul to the long-leg fence after Kohli stuck Rajasthan in, but apart from the Dravid-Binny association in which the younger man was clearly the dominant partner, Rajasthan were comprehensively outclassed.

Binny strode out to join Dravid after Watson had been smartly taken by Kartik at mid off, leaping to snaffle a drive off Rampaul, and Ajinkya Rahane fell prey to a good slower delivery from Jaydev Unadkat. He began with a fluent punch on the up off Unadkat, then continued to bat with refreshing freedom as he hit the ball long and hard, taking a particular liking to Kartik's left-arm spin. Dravid, measured by comparison, was happy to play second fiddle during a stand of 40 off just 27 deliveres, ended by R Vinay Kumar inducing a top-edged pull from Binny that was smartly gathered by Arun Karthik, the wicketkeeper making excellent ground running backwards.

Dravid carried on, whipping and pulling Kartik for boundaries but Kartik had the last laugh, eliciting a lofted drive that snuggled nicely into long-on's hands. It triggered complete mayhem in the Rajasthan camp for no discernible reason. Well as Vinay, Rampaul and RP Singh bowled, even they must have been surprised at the ease and rapidity with which they picked up wickets while giving nothing away.

Vinay finished with 3 for 18 to wrest the Purple Cap back, Rampaul had 2 for 19 and RP Singh enviable figures of 3 for 13 from four overs, leaving their batsmen with a relatively straightforward task.

Comments
Topics mentioned in this article
Cricket IPL 2013 Chris Gayle Rahul Dravid Brad Hodge Ravi Rampaul Shane Watson AB de Villiers James Faulkner Sreesanth Virat Kohli Siddharth Trivedi Ajinkya Rahane Kevon Cooper
Get the latest updates on India vs Australia Series, check out the India vs Australia Schedule for 2020-21 and Ind vs Aus live score . Like us on Facebook or follow us on Twitter for more sports updates. You can also download the NDTV Cricket app for Android or iOS.