Royal Challengers Bangalore will have to beat Chennai Super Kings in their last match on Saturday to have an outside chance of progressing to the playoffs. 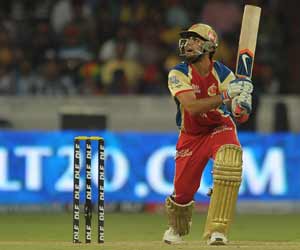 Royal Challengers Bangalore's chances of making it to the playoffs of the Indian Premier League was hit by Adam Gilchrist's fiery knock, who guided Kings XI Punjab to a seven-wicket win at M Chinnaswamy Stadium in Bengaluru on Tuesday.

Virat Kohli, who scored 57 to guide Bangalore to a challenging total of 174 for 5, said his bowlers failed to hit right areas.

"175 was a pretty good total to defend. But we didn't hit the right areas and our bowling line up has to look into that," said Kohli after the match.

Kohli also said it was an unusual Bangalore wicket but he wasn't expecting any change.

"In the first 5-6 overs, the pitch was a bit different and it was keeping low and slow. It settled down beautifully in the second half and we didn't expect that. I thought it would remain slow throughout the game," he added.

Bangalore are in a must-win situation when they host Chennai Super Kings on Saturday but the skipper is optimistic about his team's chances.

"It's not a good position to be in, with a must-win game at hand. But we have to deal with it. We have to let the guys be themselves and not put pressure on them. They are professionals and know what to do," the skipper concluded.

On the other hand, Punjab captain returned to form, a bit late though, by hitting an unbeaten 85 of just 54 deliveries.

Gilly credited his teammate Azhar Mahmood (61), who was involved in a 118-run stand for the second wicket with his skipper to set up Punjab's victory.

"I'm not sure if this can be called 'form', but thanks anyway. All credit goes to Azhar Mahmood. He came in and got the boundaries and I connected a few as well. He played his natural game and I was trying to attack, but I could barely clear the 30-yard circle," Gilchrist said.