The Australian from New South Wales hit nine boundaries and one six to propel his team to a competitive total. 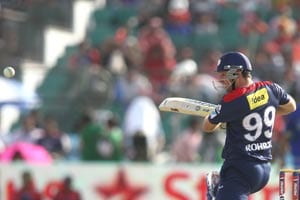 "It wasn't that we bowled badly but it was their batsmen who were very good. They are world-class batsman and it was hard to stop them when they got going. We had thought that 154 was a good challenging total but perhaps we had ended 30 runs short to have them under any sort of pressure," Roherer said.

The Australian from New South Wales hit nine boundaries and one six to propel his team to a competitive total.

"Rajasthan Royals also did a very good job. They did exactly what was needed. They showed a lot of patience and really played well."

He also had a few words of praise for Pravin Tambe, who made his IPL debut at the age of 41 years and 211 days.

"He kept it simple but he has good control and length. He is one of those stories who didn't get the opportunities. But now I hope after his debut he would be getting more opportunities."

Talking about his own innings, the Aussie said that it was his first major knock in four outings.

"It took a few weeks to get adapted to wickets and atmosphere. I had to put my head around the changes I had to make."

Referring to his experience of playing in the IPL, Roherer said he was happy to be here.

"It has been very good for me in Big Bash and 20-20 championship and I could make my debut to play for Australia A.

"The IPL is the best 20-20 tournament in world and I want to extend my wonderful experience here to other tournaments in coming days."

Comments
Topics mentioned in this article
Cricket IPL 2013 Ben Rohrer Rajasthan Royals Delhi Daredevils
Get the latest updates on ICC T20 Worldcup 2022 and CWG 2022 check out the Schedule, Live Score and Medals Tally. Like us on Facebook or follow us on Twitter for more sports updates. You can also download the NDTV Cricket app for Android or iOS.