IPL 2013: We have been giving away runs in death overs, says Vinay Kumar

Vinay, who returned to play for Bangalore in the 2012 IPL after the franchise bought him for USD 1 million, said Zaheer Khan's comeback has given a boost to RCB. 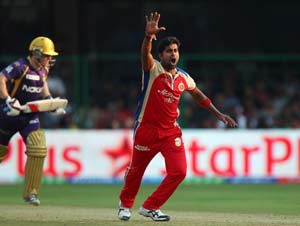 Royal Challengers Bangalore's most successful bowler in the ongoing Indian Premier League, R Vinay Kumar on Friday said their death bowling in the last few matches has been a cause for concern.

"We did really well as a bowling unit in the first few games. We have defended nine and seven runs in the last over in this tournament. In the last few games that hasn't been the case and we have been giving away runs in the death overs," Vinay said.

"We need to bowl in the right areas and bowl to our strengths," he said on the eve of Bangalore's must-win match against Chennai Super Kings.

Vinay, though, added that every team has been confronting the same problem.

"That's happening with every team - the bowlers did well in the first half of the tournament and now the batsmen are doing well. Sometimes, the dew factor also plays a part as the ball tends to slip a bit."

Vinay said his side would look to give its best shot in the match tomorrow and not think about the pressure.

"The pressure is there from game one. The thing is if want to win IPL you need to take every game seriously. If we think this is a must-win game, it will bring unnecessary pressure on us.

"We need to go there and need to give the best shot. Every game is important for us," he told reporters at the pre-match press conference.

Vinay said the preparation for the match has been good.

"We know if we win this game we have more chances to qualify."

Vinay, who returned to play for Bangalore in the 2012 IPL after the franchise bought him for USD 1 million, said Zaheer Khan's comeback has given a boost to RCB.