James Faulkner's second five-wicket haul in the Indian Premier League went in vain as Rajasthan Royals still suffered their biggest loss in terms of runs this season. Here are the statistical highlights from the game. 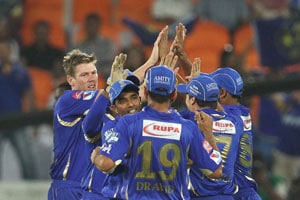 James Faulkner's second five-wicket haul in the Indian Premier League went in vain as Rajasthan Royals still suffered their biggest loss in terms of runs this season. Here are the statistical highlights from the game.

# Hyderabad's convincing win is their second biggest by runs margin at the IPL, next only to the 30-run win over Punjab at Mohali on May 11, 2013.

# Rajasthan's 113 for nine is their lowest score at the IPL 2013, surpassing the 117 against RCB at Bangalore on April 20, 2013.Â  The said total is their lowest against Sunrisers Hyderabad.

# Sunrisers Hyderabad scored 21 for three - the least runs in the Powerplay 1 by them at the IPL 2013, emulating Delhi Daredevils' 21 for three against Kings XI Punjab at Dharamsala on May 16. Their previous lowest in Powerplay in the present tournament was 25 for four against Pune Warriors at Pune on April 17

# The first ten overs in Sunrisers Hyderabad's innings have produced 48 for three - the lowest in the present competition is 38 for five by Pune against Punjab at Pune on April 7.

# James Faulkner (5/16) took his tally of wickets to 26 at an average of 13.96 in 14 matches in the present competition, establishing a record for Rajasthan Royals at the IPL, obliterating Sohail Tanvir's tally of 22 at 12.09 runs apiece in eleven matches in 2007-08.

# Faulkner has earned the Purple Cap, thanks to his superb bowling performance. His strike rate of 12.7 in the present competition is quite impressive.

# Faulkner is the first bowler to capture ten wickets (ave.3.60) in two games against Sunrisers Hyderabad.Â  No other bowler has claimed even five wickets against them at the IPL.

# Faulkner (5/16 - his career-best in Twenty20) became the first bowler to register two instances of five wickets in an innings at the IPL - his first was five for 20 against Hyderabad at Jaipur on April 27, 2013.

# Cameron White has recorded his ninth duck in Twenty20. He is the first Hyderabad batsman to register two ducks in the present competition.

# Biplab Samantray (55 off 46 balls) has posted his first fifty for Hyderabad at the IPL - his second in Twenty20.

# After seven unbeaten innings in succession at the IPL, Binny was dismissed.

# Samantray and Sammy were involved in a stand of 56 - Hyderabad's highest fifth-wicket partnership at the IPL.

# Rajasthan Royals have scored 44 for two after ten overs - the least number of runs managed by them in the first ten overs this season.Â  They scored 33 without losing any wicket in the Powerplay 1 - their lowest at the IPL being 24 for three against Chennai at Jaipur on May 12

# Amit Mishra (4-0-8-2) became the third bowler to produce an economy rate of 2.00 in a four-over spell in the present competition - the first two being Karan Sharma and Mitchell Johnson.

# Mishra has received his seventh MoM award at the IPL. Both Michael Hussey and Mishra have received four MOM awards at the IPL 2013 - the most in the present competition.

Comments
Topics mentioned in this article
Cricket IPL 2013 James Faulkner Sunrisers Hyderabad Rajasthan Royals
Get the latest updates on ICC T20 Worldcup 2022 and CWG 2022 check out the Schedule, Live Score and Medals Tally. Like us on Facebook or follow us on Twitter for more sports updates. You can also download the NDTV Cricket app for Android or iOS.