Noted commentator and former India Test all-rounder is also a member of the IPL governing council. He also worked closely with Modi when IPL was launched in 2008 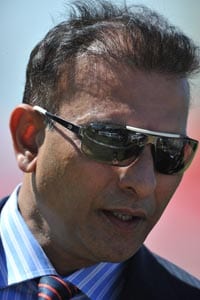 Contradicting Lalit Modi's claim that the Indian Premier League governing council (read the Board of Control for Cricket in India) and the International Cricket Council were caught napping in the spot-fixing case, former Indian Test all-rounder Ravi Shastri feels there are enough precautions in place.

In various TV interviews on Thursday, former IPL commissioner Modi had slammed the BCCI and its lack of governance for the spot-fixing scandal. Modi said he had warned the IPL about match-fixing but the bosses did nothing.

"It's the tail-end of the tournament and it's really very shocking that neither the ICC nor the IPL management got wind of it (spot-fixing)," Modi said, adding that he had sent the IPL COO Sunder Raman an email from an English journalist, who suspected at least five matches this season were allegedly fixed. Modi criticized the BCCI "for sleeping" over the threat.

Shastri, who was a Modi confidant when the cash-rich T20 championship was launched in 2008, now differs with the former IPL boss.

Writing in his newspaper column, Shastri said: "I insist with a hand on my heart that this edition has been brilliant. The quality of cricket has been top-class. Enough preventive measures have been put in place."

BCCI president N. Srinivasan too had emphasized on Thursday that the Board had taken necessary steps to curb betting.

"We have an anti-corruption code and an anti-doping code. We have advised state units on steps to be taken. So the involvement of a Test player (Sreesanth) is shocking," Srinivasan said.

Modi has attacked Srinivasan, calling him a 'monster' who runs global cricket from Chennai. Modi and Srinivasan have been at loggerheads ever since the 49-year-old former IPL chairman was suspended in April 2010 for financial irregularities.

"During my time there were no reports of spot-fixing, match-fixing in IPL. The tournament was clean," said Modi. Saying the IPL took all precautions to guard against match-fixing, Modi said the spot-fixing incidents reflected poorly on the system of governance.

Now Shastri has defended the IPL and its franchises, saying "two or three black sheep can't or shouldn't take the smile off their (Rajasthan Royals) faces."

The former Test star says: "Zero tolerance is the buzz word among the franchises and the IPL's Governing Council. I, being part of the Governing Council, know fully well how integrity is completely non-negotiable, be it in spirit or action."

Unlike Modi's allegation of being sloppy, Shastri also praised the BCCI for quickly suspending the players on the basis of police reports.

Comments
Topics mentioned in this article
IPL 2013 Cricket Lalit Modi Sreesanth Ravi Shastri
Get the latest updates on ICC T20 Worldcup 2022 and CWG 2022 check out the Schedule, Live Score and Medals Tally. Like us on Facebook or follow us on Twitter for more sports updates. You can also download the NDTV Cricket app for Android or iOS.