Contribution from every member of the team has contributed to Hyderabad's success, says Shikhar Dhawan. The left-hander has been in good form after recovering from an injury sustained during the Test series against Australia. 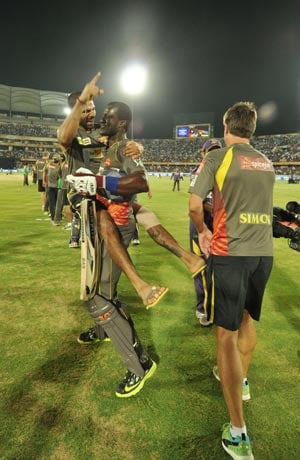 Sunrisers Hyderabad have scripted a fairytale story of sorts, so far in the ongoing edition of the Indian Premier League. Having edged out Royal Challengers Bangalore in the race to the play-offs, the team has shown good fighting spirit with contributions from almost every player. Opener Shikhar Dhawan says it is this team work that has helped Hyderabad make it to the final four.

Hyderabad defeated Kolkata by five wickets on Sunday to reach the play-offs of IPL. It may have been an unimpressive win - 7 balls remaining despite a target of 131 - but not many would have backed the newborn team (it was formed after Deccan Chargers were disbanded) this far anyway.

"It is a great feeling to be in the knockouts. It is our first year and we have made it to the playoffs when not many gave us a chance. At the moment, it is amazing to see our name in the top four," Dhawan was quoted as saying by iplt20.com.

Dhawan has played a crucial role in Hyderabad's endeavours so far in the tournament. The left-handed batsman has scored 278 runs from his 9 innings but still believes it is the entire team which has combined well to deny oppositions.

"I believe the reason we have succeeded as a group is because this team is not about any individual. We all gel together and enjoy each other's success," he said after Sunday's match which saw Darren Sammy smacking two massive sixes to take his team past the finish line.

The team will now play Rajasthan Royals in the eliminator in Delhi on Wednesday (May 22). The winner of the match will face off against the team which emerges second best from the Chennai - Mumbai match (scheduled to be played on Tuesday).