IPL 2013: Responsibility has made me more confident, says Dishant Yagnik

Coming at number three, Yagnik scored a quick-fire 34 in their win against Mumbai Indians. 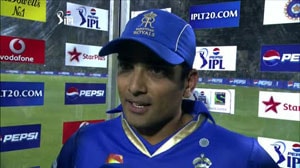 Rajasthan Royals wicket-keeper batsman Dishant Yagnik feels that he has played his role of a pinch hitter to best of his capacity and the responsibility entrusted on him has made him more confident.

"To bat at number three is a great opportunity considering that IPL is the biggest platform. I have also performed my role to my best efforts and that has given me more confidence but that has raised expectations too," Yagnik said told reporters ahead of his team's match against Sunrisers Hyderabad tomorrow.

Coming at number three, Yagnik scored a quick-fire 34 in their win against Mumbai Indians.

"The team think tank has shown confidence in my abilities and I was given a chance to bat at number three against the best teams in the fray. It is necessary to perform also but it won't be easy to face the likes of Steyn on Saturday in match against Hyderabad. Such great bowlers know what they have to do and when," said Yagnik.

Yagnik said the Sunrisers have been bolstered by Shikhar Dhawan's return to side but they were more concerned about their own strong points.

"We know we have good depth in our squad and want to concentrate on our strong points rather worrying about others. Coach paddy Upton, who is a psychologist, too, has kept the environment light and whole team is like a closely knit family. I and Ajinkya Rahane have been entrusted to maintain the energy level of the team and to lift it when it is low," the local lad said.

With four wins in seven matches so far, Yagnik seemed confident of his side finishing in the top four after the league stage.

"We have as good a team as IPL-1 when we became champions. We are sure of finishing among last four and can also surprise by doing encore of the season one," he said.

The wicket-keeper said with Shane Watson coming back into form, the side is going to benefit hugely from it.

"We have lost two away matches on trot but we are not concerned about the results as the work ethics and process are more important. We know we are bound to loose few matches in such a long tournament. We were feeling confident. The biggest positives has been Shane Watson coming back to form and his bowling too has given us more options," he said.

Comments
Topics mentioned in this article
Cricket IPL 2013 Dishant Yagnik Rajasthan Royals
Get the latest updates on IPL 2020, check out the IPL Schedule for 2020 and Indian Premier League (IPL) Cricket live score . Like us on Facebook or follow us on Twitter for more sports updates. You can also download the NDTV Cricket app for Android or iOS.