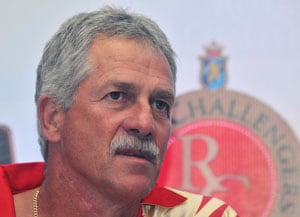 Impressed with a fit-again Zaheer Khan's magnificent bowling show against Chennai Super Kings, Royal Challengers Bangalore coach Ray Jennings is hopeful that the veteran pacer will play a key role if the team sneaks into the playoffs.

"The tough thing for me was to try get Zak match fit. Hopefully he hasn't started off too late and he is going to help us in semi-finals and finals," said Jennings after a 24-run win over Chennai Super Kings in which Zaheer took four wickets in two overs on Saturday night.

"We all know that when he is match fit he has amazing ability to handle the heat and the pressure in key moments. He even surprised me of his catch at the end. He was fired up," he told reporters here.

Jennings said he would have liked to be in a situation where his team could control the points table even as it waits for favourable results elsewhere to qualify for the play-offs.

"From my side I was interested in how we played the game (against CSK). The guys were keen even if it was raining. They were very connected to the game. They played good cricket. That is why we are here to entertain the crowd," he said.

Jennings said the spell of Zaheer Khan and Ravi Rampaul pushed Chennai on the backfoot which made chasing a difficult proposition for the batsmen.

"The most important thing in games going down to eight overs (is that) you got to be on the batting from ball one or else you will be (left) behind. We did exactly that," Jennings said.

Meanwhile, CSK Coach Stephen Fleming said his team is not going to think too much about Saturday's loss against RCB in a shortened game and focus on play-offs to be played in Mumbai and Delhi.

"We have got a very patterned style of play based on 20 overs when that changes, we are little bit at sea. Probably it was ideal for them (RCB)," he added.