Stressing the importance of playing good cricket, Dravid asserted that his side is focusing solely on moving to the play-offs without losing any sleep on the fate of the other teams. 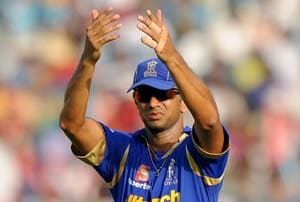 Currently, four foreign recruits are allowed in the playing XI while each franchisee can have 11 overseas players in the squad.

"We have a lot of very good foreign players. It is very difficult for us as we can only play four. I wish IPL would change that and get more foreign players, but it's not possible. Someone has to miss out," Dravid said at a function in Kolkata.

Dravid made the remark while lauding teammate and English batsman Owais Shah's performance in the last edition of the IPL. Shah, who represents Rajasthan Royals, has so far played one match in the ongoing tourney.

"I know he has been a top performer for us. In the last season, he had done very well but for the combination and balance of the side sometimes we can't fit all the foreign players," Dravid said.

Stressing the importance of playing good cricket, Dravid asserted that his side is focusing solely on moving to the play-offs without losing any sleep on the fate of the other teams.

"To be honest, we aren't worried about what happens to other teams. We are focusing on ourselves. Whether others are in the play-offs or are knocked out, it doesn't matter. I don't care who the other three teams are in the play-offs as long as we are one of the four," Dravid said during a felicitation ceremony organised by Rupa and Company Ltd. in Kolkata.

Now lying third in the points table, the Royals will take on Kolkata Knight Riders at Eden Gardens on Friday.

"We have played particularly well so far. We are going to take a game at a time. We have been doing some things right, have been playing good cricket; specially in tough situations, we have somebody stepping up and doing the job for us. That's what we got to focus on. The next few days will be pretty busy for us. We will just try to play good cricket and put simple things in place," said Dravid.

Comments
Topics mentioned in this article
Cricket IPL 2013 Rahul Dravid Owais Shah Rajasthan Royals
Get the latest updates on India vs Australia Series, check out the India vs Australia Schedule for 2020-21 and Ind vs Aus live score . Like us on Facebook or follow us on Twitter for more sports updates. You can also download the NDTV Cricket app for Android or iOS.