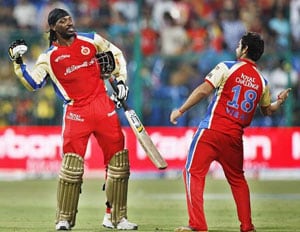 As the low clouds of the spot-fixing controversy hung over the sixth edition of the Pepsi Indian Premier League there was an unusually cheery soundtrack to the Chennai Super Kings' Friday evening practice session at the M Chinnaswamy Stadium. A 150-strong group of young women cricketers, in the city for a training camp, were in the stands right behind the nets from which the batsmen launched towering sixes. While the real impact of the spot-fixing saga on viewer interest will be known in the weeks to come, when television ratings are computed, there seemed to be no dip on the ground.

For Chennai, who have led the pack all season and were never really in danger of not making the cut, despite the Mumbai Indians eventually taking top spot, their final league match of the season, on Saturday (May 18) against the Royal Challengers Bangalore, merely afforded a chance to reaffirm all that was good about their methods. Even without being able to put their best team on the park - Faf du Plessis would have walked into the eleven if not for a back injury - Chennai have had enough power in their ranks to cover all bases.

For Bangalore, the road has been less comfortable. After starting strongly, they have had to scrap for wins. Initially, it was playing away from home that posed a problem, but just as that hurdle was crossed, inconsistency came to the fore. While Bangalore insist that they are not over-dependent on Chris Gayle, and when you have Virat Kohli and AB de Villiers in your ranks there's no obvious reason why you should rely on one batsman, irrespective of who he is, opposition bowlers will always fancy their chances once they get Gayle early.

The statistics, however, are not especially damning. In the seven matches Bangalore have lost, Gayle has scores of 1, 4, 18, 34, 61, 33 and 77. In victories, Gayle's numbers are: 92, 13, 85, 13, 49*, 175*, 21 and 4. What this tells us, in numbers, is something we instinctively know: when Gayle goes big, it puts Bangalore in prime position, but even when he does not fire there have been times when others have pulled their weight. While winning without Gayle might be eminently feasible, the chances of Bangalore losing increase exponentially when he does not get to at least a half-century.

"There is a huge amount of planning done on Chris Gayle and we are no different. We have been lucky enough to get him out on a number of occasions," said Stephen Fleming, coach of the Super Kings. "We just have to make sure we bowl in the areas that we want to, and hopefully it will be our day. Gayle has been dynamic, and his consistency, especially on this ground, has to be admired. We could have our work cut out for us if it is a high-scoring game and if any of their top-three get away."

What has been a problem for Bangalore, is the lack of quality in the domestic line-up. While Vinay Kumar has bucked the trend, as he always seems to, and found ways to pick up wickets even on the flattest of decks, Bangalore's young Indian batsmen have failed to deliver. The injury to Mayank Agarwal did not help matters, but even taking that into consideration, Bangalore have not found a way to ease the dependency on their foreign four. They have played KL Rahul well out of his comfort zone low down the order, let Abhinav Mukund largely languish on the bench, and steadfastly refused to trust in Saurabh Tiwary.

For Bangalore now, the situation has come to such a pass that it is not enough for them to merely win - they can at best get to 18 points while three teams already have 20 or more - but must depend on the Sunrisers Hyderabad not doing well enough. No team likes to lose control of their destiny, and this could just cost Bangalore a spot in the final four.