There might be little more than pride at stake for Delhi, eliminated long before the calculators were whipped out of cold storage, but no one – least of Punjab – will expect them to roll over and die. 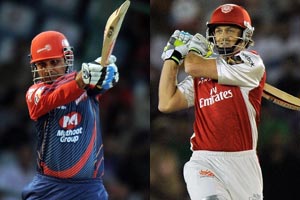 Despite Kings XI Punjab's sensational victory over Royal Challengers Bangalore on Tuesday night, very little has changed so far as their qualification chances are concerned. Punjab, with 12 points from 14 games, still have no option but to win their remaining two matches and hope that other results go their way so that they can sneak in on the Net Run Rate. The second half of the equation is not in their hands; the first most certainly is, and that's what will occupy their minds as they take on Delhi Daredevils in the Pepsi IPL at the breathtaking HPCA Stadium in Dharamsala on Thursday (May 16) night.

There might be little more than pride at stake for Delhi, eliminated long before the calculators were whipped out of cold storage, but no one - least of Punjab - will expect them to roll over and die. No team has been doing any other team any favours in this competition, so if Punjab expect their challenge to stay alive for at least the next couple of days, they must summon the courage and wherewithal that their captain exemplified at the M Chinnaswamy Stadium on Tuesday.

For a majority of this season, Adam Gilchrist has been unrecognisable as the brutal, uncompromising ball-striker that sent shivers down the spine of bowlers across the world. Clearly, the absence of regular competitive cricket is beginning to take its toll but once in a while, Gilchrist has provided glimpses of the force he used to be. On Tuesday, he rolled the years back in some style, producing a spectacular unbeaten 85 that helped his team make light of what was a challenging chase at a venue where the Bangalore franchise had won all its previous six games.

Both the seven-wicket romp, and the manner in which it was attained, have lifted spirits in the Punjab camp, even if the realisation that their fate is no longer in their own hands has tempered that buoyancy to some extent. Perhaps belatedly to make a difference this season, Punjab have finally hit upon the right batting personnel and the right batting order. Azhar Mahmood at No. 3 is always value for money but Punjab have been reluctant to use him up the order. His association with Gilchrist in a match-winning second-wicket stand should extend their partnership to Dharamsala, a quick-scoring ground both because of the high altitude and the impeccably maintained outfield where there always is value for strokes.

Dharamsala has seen sharp spells of rains for the last few days and sudden cloudbursts are a genuine threat at this venue. The last thing Punjab require is a truncated match, which is always a bit of a lottery, or a washout, which will spell instant elimination.

Elimination came a-calling fairly early in the season for Delhi, who began with six losses on the trot and haven't remotely resembled anything near the side that dominated the league part last season despite most of the personnel remaining the same. Their batting has struggled for impact and consistency, the pace-heavy bowling blunted by the slow, low pitches at the Kotla which have nullied any home advantage there might have been. Delhi have looked and played like a unit disjointed, clearly struggling to compensate for the loss of Kevin Pietersen and sorely handicapped by the drying up of runs from the blades of Mahela Jayawardene, their designated captain, and Virender Sehwag, their former skipper.

David Warner, thrust into the hot seat for the last couple of games, has had his moments but has essentially ploughed a lone furrow, with only sporadic help from Unmukt Chand and Ben Rohrer. The bowling has only been slightly better. Morne Morkel, who played such an influential part in Delhi's march last year, has been well below par, and in the lack of a cutting edge, Delhi have singularly failed to maintain any pressure worth the name on the opposition for any sustained period.

Perhaps, the conditions in Dharamsala, not to mention the wonderful setting, will stoke Delhi's competitive instincts. Punjab will be hoping not, because that will sound their death knell at a venue where they have won three of seven games previously.

Neither side practised on match eve, both arriving bleary-eyed and completely bushed after matches the previous day. Punjab flew out to Delhi from Bangalore immediately after Tuesday's game and reached Dharamsala by mid-morning on Wednesday while Delhi, who played the night game in Chennai, only traipsed into their hotel by evening and immediately hit recovery mode. Not ideal preparation for either side, but just as Delhi will hope to ride on pride, Punjab will hope adrenaline and desperation will do the trick for them.