All-rounders SHane Watson and Kieron Pollard were involved in a heated confrontation on and off the field during Mumbai's 14-run victory over Rajasthan at the Wankhede Stadium on Wednesday. 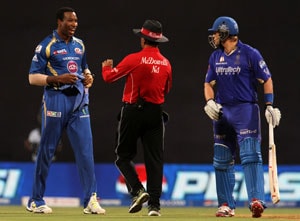 West Indies all-rounder Kieron Pollard successfully got under the skin of Rajasthan Royals' batting mainstay Shane Watson which eventually led to the Aussie being dismissed and eventually leaving the dug-out in disgust.

It all started in the fifth over after Royals' Sanju Samson got out. It seemed that Pollard said something to Watson which the Aussie didn't find amusing enough.

Such was Watson's anger that the on-field umpires directed Mumbai captain Rohit Sharma to warn Pollard about his conduct.

Watson was dismissed at the start of the 10th over and it was none other than Pollard who took the catch, and gave the batsman a send-off with over-exhuberant celebrations.

However the Pollard-Watson show did not end there. Watson was sitting in the dug-out and Pollard was fielding at the long-on boundary just in-front of the Australian.

TV replays showed that further words were exchanged between Pollard and Watson. Rajasthan skipper Rahul Dravid proceeded to direct Watson in to the dressing room and the Aussie all-rounder picked up his gloves and bat and walked away.

Comments
Topics mentioned in this article
Cricket Rahul Dravid IPL 2013 Shane Watson Sreesanth Kieron Pollard
Get the latest updates on ICC T20 Worldcup 2022 and CWG 2022 check out the Schedule, Live Score and Medals Tally. Like us on Facebook or follow us on Twitter for more sports updates. You can also download the NDTV Cricket app for Android or iOS.