IPL 2013: Only Shane Watson can play such a destructive knock, says Rahul Dravid

MS Dhoni, on the other hand, took a lot of positives out of the loss that saw Rajasthan Royals guarantee a playoff berth this season. 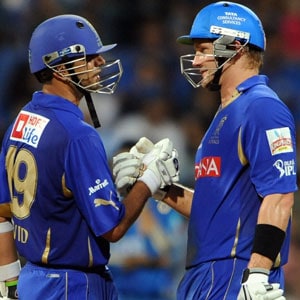 A jubilant Rahul Dravid heaved a huge sigh of relief as his side Rajasthan Royals beat the best side in the 2013 Indian Premier League Chennai Super Kings by 5 wickets in Jaipur on Sunday.

"There was an amazing spell of 4-5 overs for us when we got 50-60 runs. Only someone like Watto can do that. They had a couple of spinners and we knew we could target them. The Jaipur wicket is fantastic for cricket and it supports both bowlers and batters. We knew we had to back-end our batting today, Dravid said in the post-match presentation.

Rajasthan repeated their triumphant performance of 2008 this year by winning all 8 home games in a season. Dravid and his boys did a lap of honour for the supporters at Sawai Mansingh Stadium.

"It's been great to play and win eight here in Jaipur. The support, every game here has been played in front of a packed house. It's one of the memories I'll cherish," Dravid added.

Man of the Match Shane Watson, who scored his second fifty this season was happy that his calculated risks came off.

"It was a bit of a slow start, I started to take a few risks and it came off for me. Mishits were falling into gaps. We knew 140 was going to be a decent chase, we just needed one big partnership, Binny got it going in the Ashwin over. We were waiting for one opportunity to get one big over. It seemed like spin was a bit easier to play than faster bowling," the swashbuckling all-rounder said.

Mostly gracious in defeat MS Dhoni was no different on Saturday as he rued the inability of his middle order batsmen to make the best of the solid start.

"We were not able to capitalise on the good starting our batting. In the positives, our middle and lower middle order got a chance to bat, though Raina and I got out cheaply. I was worried about the spinners, once they went after Ashwin I thought let's bowl the fast bowlers. It was a lovely track, we should have scored more runs. We didn't get enough."

Rajasthan Royals co-owner Shilpa Shetty was overjoyed after the result and said, "it feels like we've already won the final."

Comments
Topics mentioned in this article
Cricket Shane Watson IPL 2013 Rahul Dravid
Get the latest updates on ICC T20 Worldcup 2022 and CWG 2022 check out the Schedule, Live Score and Medals Tally. Like us on Facebook or follow us on Twitter for more sports updates. You can also download the NDTV Cricket app for Android or iOS.