Ahead of Kolkata Knight Riders game against Pune Warriors India at Ranchi on Wednesday, Gautam Gambhir says there is no devil in Ranchi's wicket. He feels Royal Challengers Bangalore's failure to score more than 115 last Sunday was the inability of their star batsmen. 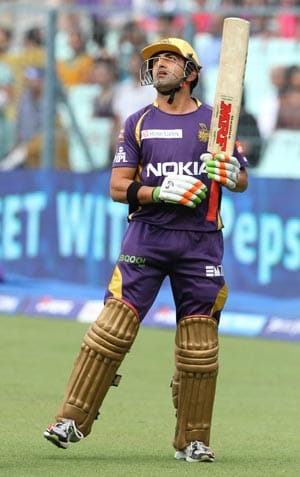 Batsmen's tendency to blame wickets for their failures are uncalled for, according to Kolkata Knight Riders captain Gautam Gambhir. The Indian Test opener, now out of the national side due to a shortage of runs, feels too much is being made out of the pitch in Ranchi, Wednesday's venue of the KKR versus Pune Warriors Indian Premier League game.

The wicket at Ranchi's JSCA international stadium was criticized after KKR beat Royal Challengers Bangalore by five wickets in a low-scoring match on Sunday. In spite of a powerful batting line-up, Bangalore managed all of 115 for 9 in their 20 overs. KKR had lost half their side for 103, before Ryan Ten Doeschate and Rajat Bhatia got the winning runs.

"It's sad when batsmen blame wicket for their failures. If Bangalore failed to score more than 115, it's because their batsmen were not good enough. Why blame the pitch?," Gambhir said on Tuesday. The left-handed KKR skipper has himself run hot and cold and refuses to blame wickets and or playing condition for his or the team's debacle in IPL 2013.

"I hate to blame the pitch for batting failures. Ranchi was always a 150 wicket. If you can't get the runs, blame yourself. We never find our faults, we always pick on the wicket. The Ranchi wicket is just fine. There is no devil in it. A good batsman plays well on any kind of wicket," Gambhir said.

With 12 points from 14 matches, KKR only have a mathematical chance of making the top four. Gambhir is not worried as the captain of the defending champions.

"We can't control our destiny. We can only look to play good cricket and that is what we haven't done this season. In T20, batting, bowling and fielding has to click at the same time. This season we have failed to do this. There is no guarantee we will always play like champions," said the KKR captain.

Comments
Topics mentioned in this article
Cricket IPL 2013 Jacques Kallis Gautam Gambhir Shoaib Akhtar MS Dhoni Kolkata Knight Riders Ajaysinhji D. Jadeja
Get the latest updates on ICC T20 Worldcup 2022 and CWG 2022 check out the Schedule, Live Score and Medals Tally. Like us on Facebook or follow us on Twitter for more sports updates. You can also download the NDTV Cricket app for Android or iOS.