IPL 2013: Chennai Super Kings crumble to their lowest total ever, lose to Mumbai Indians by 60 runs

Chasing 139, Chennai's solid batting line up never looked like reaching the target despite Pollard's three dropped chances in a row. The team folded on 79 - the fourth lowest total in IPL's history 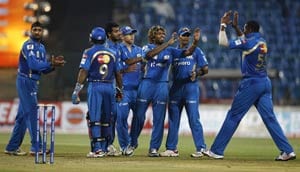 Given the nature of the Twenty20 format where one dropped chance could prove to be the difference in a match, Kieron Pollard should count himself lucky that he dropped three catches in as many deliveries and still ended up on the winning side. That perhaps summed up the mood in the Chennai Super Kings camp as their seven-match winning streak was brought to a complete standstill by Mumbai Indians, whose unbeaten run at home this season was extended. In the process, they jumped to the third spot in the Pepsi Indian Premier League 2013 standings. (Watch Analysis)

A capacity crowd of 33,000 that packed the Wankhede Stadium on Sunday (May 5) in anticipation of some fireworks, given the star power on display, instead witnessed a top-order self destruction from both teams. Fine cameos by Rohit Sharma and Harbhajan Singh, some ordinary fielding and an exhilarating spell of swing bowling by Mitchell Johnson set the foundation for Mumbai's massive 60-run victory. (Related read: The stats from the match)

Mumbai, who posted an average of 190 batting first in their four previous home games this season, were far from their best on a surface that was nowhere as menacing as some of the ones witnessed earlier in the tournament. Yet, the batting unit's inability to cash in set the alarm bells ringing as early as the 13th over when Mumbai were reduced to 66 for 4. It took a last-ditch effort from Rohit (39 off 30 balls) and Harbhajan (25 off 11 balls), who smashed 57 off the last 5 overs, to take them to a competitive 139 for 5 in 20 overs. (Also see: Match pics)

When Pollard dropped three catches that Hussey offered in the first over, bowled by Johnson, there was shock in the Mumbai ranks But Johnson roared back in style to pick up the wickets of Murali Vijay and Suresh Raina off consecutive deliveries as the stunned silence made way for manic applause. When S Badrinath fell three balls later, Chennai were in troubled waters at 9 for 3 in the third over.

Any thoughts of a counterattack were soon put on the back burner as Dwayne Bravo was snapped up by Pawan Suyal, the left-arm seamer, as Chennai's hopes of mounting a challenge was fast slipping away.

All that was left was for the genius of Mahendra Singh Dhoni to pull off a miracle. But walking in at 34 for 5 and losing Michael Hussey soon after didn't make matters any easy. When he holed out to Pollard at long off in the 12th over, the match was all but over. Ravindra Jadeja swung his bat around for a wee bit before being the last man to fall as Chennai were bowled out for 79 in 15.2 overs.

That meant Mumbai remained unbeaten against Chennai across all editions at the Wankhede Stadium. For Chennai, what added insult to injury was the fact that they weren't able to surpass 80, which was the season's lowest total made by Delhi Daredevils on Saturday. The loss notwithstanding, their position at the top of the table wasn't under immediate threat.

Comments
Topics mentioned in this article
Cricket IPL 2013 Albie Morkel Lance Klusener MS Dhoni Ben Hilfenhaus Murali Vijay Wriddhiman Saha Mumbai Indians Chennai Super Kings
Get the latest updates on ICC T20 Worldcup 2022 and CWG 2022 check out the Schedule, Live Score and Medals Tally. Like us on Facebook or follow us on Twitter for more sports updates. You can also download the NDTV Cricket app for Android or iOS.