IPL 2013: MS Dhoni says Raina rather lucky to score 99* than unlucky to miss a hundred

The net run rate-boosting win helped Chennai Super Kings stay firm on top stop with 20 points from 13 games and a booked place in the playoffs. 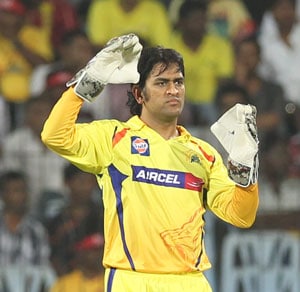 Chennai Super Kings skipper MS Dhoni heaved a huge sigh of relief after his side thumped Sunrisers Hyderabad by 77 runs at Uppal, Hyderabad on Wednesday. Chennai came into the match after suffering a humiliating 60-run loss against Mumbai Indians and Dhoni is satisfied to erase those memories.

"It was up to the players to mentally discard the last game and I'm glad they did that today," said Dhoni at the post-match presentation at the Rajiv Gandhi International stadium.

The net run rate-boosting win helped Chennai Super Kings stay firm on top stop with 20 points from 13 games and a booked place in the playoffs.

"The win was like the last game, just the result was on our side today. Murali Vijay and Mike Hussey gave a solid start to us and Suresh Raina, I'd say was rather lucky to score 99* rather than unlucky to get a hundred," said Dhoni.

Hyderabad were restricted to 146/8 in their 20 overs and bowling is still one of the areas that creases MS Dhoni's forehead.

"Our bowling is one of the areas of concern so next few games we'll get our bowling sorted out before the playoffs begin," added Dhoni.

The tournament's highest run-getter Suresh Raina became the only player to record scores of 98, 99 and 100 in the IPL history.

"It was a good day for us, God was kind that we won the game. Steve Rixon (assistant coach) has helped me maintain my good levels of fitness. I'm thankful to Hussey too, who gives honest feedback, that especially helps Indian youngsters. There is very good environment in the dressing room," said Raina after being named the Man of the Match.

Losing skipper of the Sunrisers, Kumar Sangakkara praised the opposition, saying, "They batted really well and their batsmen made very good use of the batting friendly track. Only Steyno (Dale Steyn) bowled the right lengths but rest of the bowlers failed to get the Yorkers right. We know it's a bad performance and all of us will do better in the next game."

Comments
Topics mentioned in this article
Cricket IPL 2013 Michael Hussey Suresh Raina MS Dhoni
Get the latest updates on ICC T20 Worldcup 2022 and CWG 2022 check out the Schedule, Live Score and Medals Tally. Like us on Facebook or follow us on Twitter for more sports updates. You can also download the NDTV Cricket app for Android or iOS.