AB de Villiers and Robin Uthappa both scored sensational half-centuries but it was the Bangalore franchise that triumphed by 17 runs in a high-scoring match on Thursday. 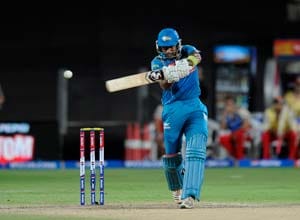 In a high-scoring encounter in Pune, The Royal Challengers Bangalore won their first game away from home this season. After riding on half-centuries by AB de Villiers and Saurabh Tiwary to post 187/3, Bangalore restricted the hosts to 170/9 in 20 overs, winning by 17 runs.

AB de Villiers was declared Man of the Match for a whirlwind knock of 50* of just 23 balls. "I really enjoyed my cricket tonight, it gave me a lot of pleasure to bat so well," said De Villiers after collecting his award. "In this format you can play a wide array of strokes but at the end of the day the basics are the most important and we did that right in this game."

RCB skipper Virat Kohli was a relieved man after Bangalore registered their first away win of the season. "We knew this win was coming. It was a team performance and we are glad to get this win under out belt," said Kohli.

Pune skipper Aaron Finch said it was disappointing for Pune to be stuck at the bottom of the table. "We lost our way in the chase. Robin (Uthappa) should have batted till the end. I'm that we fought back but we are way too inconsistent," said Finch after the match.

Robin Uthappa was the star performer for Pune, scoring 75 in an ultimately unsuccessful chase. "I was striking the ball well," said the Bangalore-boy after the match.

"The wicket got better as the match progressed but Angelo and myself couldn't take the Warriors over the line. The crowds at the Subrata Roy Sahara Stadium in Pune support us regularly and I was glad I could repay their support with a good knock," added Uthappa.

Comments
Topics mentioned in this article
Cricket AB de Villiers Robin Uthappa IPL 2013 Virat Kohli Sreesanth Aaron Finch
Get the latest updates on ICC T20 Worldcup 2022 and CWG 2022 check out the Schedule, Live Score and Medals Tally. Like us on Facebook or follow us on Twitter for more sports updates. You can also download the NDTV Cricket app for Android or iOS.