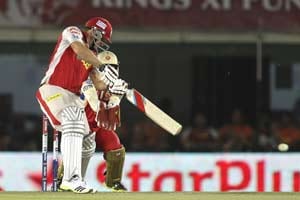 Chasing 190, Miller came in to bat as the fourth batsman in the line-up. His side was in an uncomfortable spot - 51/3 in 7.4. Though he lost partner David Hussey in the tenth over, Miller unleashed absolute carnage to send the ball flying out of the playing field, soon after.

His eight boundaries and seven sixes left the local fans screaming and the visitors in stunned silence. "I have been working a year and a half to get myself in and explode from there. Many thanks to Jesus Christ. It came off today," he said after the match.

Though he was dropped by Bangalore captain in the 14th over, it was an otherwise flawless knock from the 23-year-old. "I was just looking to go straight. I was a bit lucky when Virat dropped me. It was a big total to get but it was also a good effort from Sathish."

Miller's aggression rubbed off on R Satish who too hit the big shots at will towards the end. It was the South African though who brought the win with a straight six, completing his century in the process.