Despite a formidable target, the hosts in Jaipur showcased mature batting to pace their innings well and win off the second-last delivery of the match. 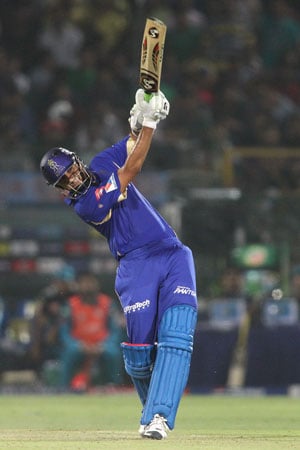 In a batting fest at the Sawai Mansingh Stadium in Jaipur, the Rajasthan Royals held their nerve to go past Pune Warriors India by five wickets with a ball to spare. It was their sixth home win in as many matches in this season's Pepsi Indian Premier League. (Watch analysis: 'Pune should have won')

Chasing 179, Rahul Dravid and Ajinkya Rahane got Rajasthan off to a flying start, putting on 98 in a partnership that was neither unnaturally hurried nor especially watchful. (See: Match in pics - Binny shines for Rajasthan)

Dravid, in particular, took on the bowlers, as Rahane settled into the role of second fiddle. Dravid made the bowlers bowl to his strength as he played most of his shots in the vee between long-off and long-on. Dravid left his crease to hit Rahul Sharma for a straight six and bring up his third fifty of the season.

Rahane returned to form with an innings stamped with conviction. A six and a four off Krishnakant Upadhyay in the fourth over got him moving but he hit only two more boundaries till Dravid's dismissal. (Also read: Stats - Dravid reaches 2000 IPL runs, Pune first to lose 7 successive games)

Dravid failed to get completely underneath a length ball from Mitchell Marsh and was caught at long off and soon Shane Watson played on to Wayne Parnell.

However, Aaron Finch failed to grab a difficult chance at short mid-wicket when Rahane was on 41, and that proved be the decisive phase in the game. Rahane, like his captain, reached his half-century with a six over extra cover. (Read: Match reactions)

Rahul Sharma took a smart catch at long-leg to send Rahane back for 67 and with 29 runs required from three overs, Wayne Parnell had Brad Hodge caught off a full toss at mid-wicket.

Robin Uthappa and Aaron Finch set the tone for the evening in a 97-run stand. They hit as many as ten fours in the Power Play overs to stun the house full crowd. It was their fifth stand of fifty runs or more this season, and was easily the most free flowing one as they batted without any hint of pressure.

In the 12th over Finch was bowled, trying to play an off cutter from Kevon Cooper against the line. Yuvraj Singh played a few copybook shots of his but trying to force the pace of play was caught in the cow corner shortly.

The first half of the evening belonged to a resurgent Uthappa.

Uthappa's inning was not all about slam bang hitting. He read the game situation well and in patches lowered his gears to play the role of an accumulator. However, soon after bringing up his second half-century, with consecutive boundaries off Siddharth Trivedi, he fell to a casual piece of play when he looked set for more. Trying to steal a sharp single in the 16th over, after Mitchell Marsh was hit on the pads, he failed to beat the throw from Sanju Samson, the wicketkeeper, and was short.

The Pune Warriors did their best, but it fell short.