IPL 2013: Raina makes it seven in a row for Chennai 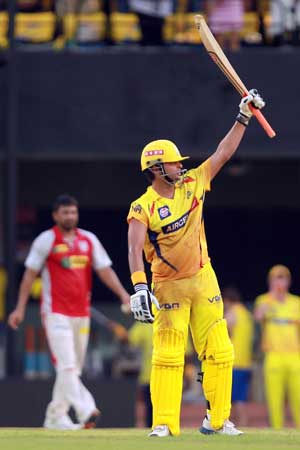 It is assumed the best way to bat in the Twenty20 format is to hammer every ball. But Suresh Raina was hardly in that sort of mood on his way to a magnificent century, which helped Chennai Super Kings beat Kings XI Punjab by 15 runs in a close encounter at MA Chidambaram Stadium on Thursday (May 2) evening. This was Chennai's seventh consecutive win in the Pepsi Indian Premier League 2013, and extended their lead at the top of the points table. (Watch Analysis)

Raina's knock wasn't the sort one saw Chris Gayle or Shane Watson play when they got their centuries earlier in the tournament. But what it did have was plenty of determination, innovation and resolve. (See: Raina's blistering knock)

His unbeaten 53-ball 100 helped Chennai amass 186 for 4 after they had opted to bat. In reply, Punjab, who fell short chasing a similar target against Mumbai Indians on Monday, were in with a shout for the majority of the chase but couldn't find that final impetus as they finished with 171 for 6. (See Stats)

Chennai haven't been able to maximise the Power Play overs despite their batting riches. But they've often had Mahendra Singh Dhoni to fall back on, and he has hardly let them down. This time around, Michael Hussey (35) and Raina had provided the solid base with a 55-run second-wicket stand, and at 82 for 2 in 11.1 overs, the stage was set for Dhoni, but an exceptional piece of fielding from R Sathish caught Dhoni short trying to steal a second run. (See Pics)

After that, however, Punjab's bowlers came under Raina's wheel. His improvisation towards the death, coupled with swift running between the wickets, ensured that the runs kept coming. He found an able ally in Albie Morkel, who smashed a 16-ball 23 that helped Chennai plunder 70 runs in the last five overs.

Punjab lost Mandeep Singh and David Hussey early but Shaun Marsh provided the spark with some attacking strokes to put pressure on the bowlers.

The game, which looked loaded in Chennai's favour at the halfway mark of Punjab's innings, was brought to life by Marsh (73 in 51 balls) and David Miller (51 in 26 balls) with a blistering 95-run stand that brought Punjab to the doorstep of victory.

The duo's ability to consistently produce the big shots towards the final stages kept Chennai on their toes, but with 19 needed off the last over, Dwayne Bravo turned the game upside down with the wickets of Marsh, Gurkeerat Singh and R Sathish in the space of four deliveries.

Chennai's bowlers were clearly not at their best but once again it was that extra push with the bat towards the end and tight fielding that clinched it for them. Punjab thus ended their away leg of matches with just one win from four games, which puts them in a precarious position on the points table. Now, with just four wins from ten matches, they have a lot of catching up to do.

Comments
Topics mentioned in this article
Cricket MS Dhoni Suresh Raina IPL 2013 Lance Klusener Dwayne Bravo Albie Morkel David Hussey Luke Pomersbach Rajagopal Sathish
Get the latest updates on IPL Auction 2023 and check out  IPL 2023 and Live Cricket Score. Like us on Facebook or follow us on Twitter for more sports updates. You can also download the NDTV Cricket app for Android or iOS.