David Warner led the chase for Delhi after Kolkata bowlers struck early. His aggressive and unbeaten knock helped his side seal the match with 13 deliveries to spare. 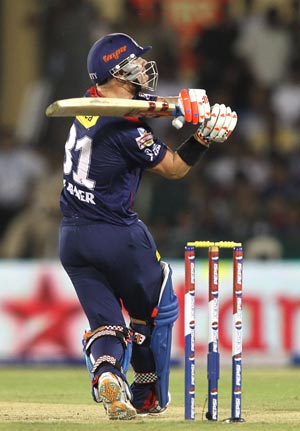 One blistering innings is often enough to take a game away from the opposition in the Indian Premier League. Less frequently, a bowler takes so many crucial wickets in the four overs he's allowed that a game as is as good as buried. But it is extremely rare that acts of brilliant fielding prove the deciding factor in a match, as was the case when Delhi Daredevils beat Kolkata Knight Riders by seven wickets at Shaheed Veer Narayan Singh Stadium in Raipur on Tuesday (May 1).

Yet another full house, in excess of 45,000, was momentarily hushed when Gautam Gambhir won the toss. When the first ball of the match, bowled by Irfan Pathan, was pulled authoritatively to the midwicket fence by Manvinder Bisla for a boundary, the crowd's fears seemed to have been confirmed. (Also see: Match in pics)

But off the second ball, which struck Bisla on the pad, Gambhir went for a suicidal run, but was comfortably outpaced by Irfan, who scooped the ball in his follow-through and threw the stumps down at the striker's end.

If Irfan's presence of mind and perfect execution of the run out ensured that Gambhir was dismissed without facing a ball, it also lifted his team visibly. Bisla attempted an ambitious inside-out shot off an express delivery from Umesh Yadav that moved away a touch and flattened his off stump.

Yusuf Pathan, short of runs in the season, connected cleanly off consecutive Ashish Nehra balls, glancing and hitting back down the ground for boundaries. Morne Morkel then got the treatment, a length ball disappearing into the stands at long-on. Attempting an encore, Yusuf speared a ball high and wide, and the crowd held its breath as Irfan tracked down the swirler, keeping his eyes on the ball as it went over his shoulder. Running full tilt, Irfan caught Yusuf to reduce Kolkata to 37 for 3.

Eoin Morgan swung the left-arm spin of Shahbaz Nadeem to the deep, and on most days would have been safe, but Yadav, sprinting around, held on to an excellent tumbling catch.

If any confirmation was needed that Delhi were not in a frame of mind to miss even half chances, it came from Ben Roehrer, who timed his leap perfectly at point to take a stunning one-handed catch off Jacques Kallis to leave the Kolkata innings in tatters at 50 for 5.

Rajat Bhatia and Sumit Narwal, both of whom play their cricket in Delhi, mounted a recovery bid. Narwal (23) took his chances and Bhatia (26 not out) was as composed as ever, and pushed Kolkata's score to 136. Against most teams that would be a walk in the park, but Kolkata's bowling line-up boasts the ability to overcome the best of batting line-ups.

Virender Sehwag was let-off early, when Gambhir dropped a sitter at short cover, but it did not prove costly as he edged Kallis to Yusuf at slip on 17. Mahela Jayawardene poked at L Balaji and was pouched at slip to leave Delhi at 25 for 2 in the fifth over. Unmukt Chand struggled to lay bat to ball against Sunil Narine, but hung on for dear life, and accumulated runs while David Warner took control of the chase. With 110 needed from 95 balls, all Delhi needed was for one of their batsmen to bat long. Warner did that, racking up an impressive unbeaten 62 (41b, 5x4, 3x6) to see his team home. (Related read: Stats - Unstoppable Warner)

Comments
Topics mentioned in this article
Cricket IPL 2013 Brett Lee Gautam Gambhir
Get the latest updates on ICC T20 Worldcup 2022 and CWG 2022 check out the Schedule, Live Score and Medals Tally. Like us on Facebook or follow us on Twitter for more sports updates. You can also download the NDTV Cricket app for Android or iOS.