Sunrisers Hyderabad's dressing room was ecstatic after their win against Kolkata Knight Riders on Sunday night. The five-wicket victory ensured that the new-born team booked the fourth and final berth in the play-offs of the Indian Premier League. 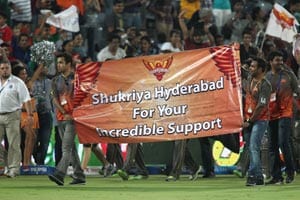 At the start of Indian Premier League 6, not many backed this team to make it to the final four. So, when Sunrisers Hyderabad defeated Kolkata Knight Riders by five wicket at home to reach the play-offs, the celebrations at the Rajiv Gandhi Stadium in Uppal (Hyderabad), overflowed.

Chasing 130, the hosts did stutter in their reply but it took two mighty blows from West Indian Darren Sammy to unleash ear-numbing jubilation all around - the team had beaten Kolkata to pip Bangalore in the race for the final berth in the play-offs.

According to reports, the Hyderabad dressing room resembled a mini carnival with hugs, smiles and congratulatory phone messages on ample display.

'Time of my life' - a song from Hollywood movie Dirty Dancing - was only one of the several dance tunes which were played, as if defining the passion. Mentor Kris Srikkanth said it was this enthusiasm that helped them immensely on the field.

"The journey for us has been fantastic. Before the start of the tournament, the only thing we told the boys was to play with a lot of passion. They have done exactly that and it is this passion in their hearts that has got the team thus far," he was quoted as saying by iplt20.com

With an eliminator match against Rajasthan Royals coming up (Wednesday, May 22), Sunrisers Hyderabad have every chance of taking their 'carnival' to Delhi (venue for the eliminator) and even Kolkata (venue for second qualifier and the final).