However, Rajasthan will be mindful of the fact that Pune Warriors India, who they face on Sunday (May 5), had inflicted an eight-wicket defeat on them only three weeks ago, in Pune. 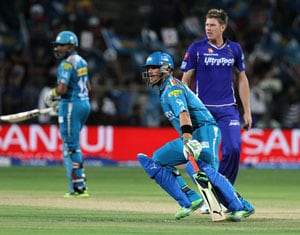 Of the 47 matches played in the Pepsi Indian Premier League so far (until May 3), only 14 have come in the form of away wins. The success of home teams has been unprecedented. And while this year's edition may have brought home conditions into sharp focus, the credit for the first team to secure a fortress at home goes to Rajasthan Royals. They are the only team in IPL history to have won twice as many games than they have lost at their home ground, the Sawai Mansingh Stadium in Jaipur.

History and form, therefore, will be a part of the Rajasthan dugout when Jaipur hosts Pune and Delhi, the two teams languishing at the bottom of the points table, in the next three days. Rajasthan have won six out of ten matches they have played so far. Two victories on the trot will help them inch closer to the tournament's next stage. If they do make the playoffs, it will be for the first time since 2008 when they won the inaugural IPL under Shane Warne's captaincy.

However, Rajasthan will be mindful of the fact that Pune Warriors India, who they face on Sunday (May 5), had inflicted an eight-wicket defeat on them only three weeks ago, in Pune.

Rajasthan would have loved to come to this game with a win over Kolkata on Friday (May 3), but an eight-wicket loss means that the game against Pune becomes doubly critical. The focus will be on Ajinkya Rahane, the top-order batsman who has only scored 39 runs in the last five innings, as he seeks to regain form and resume his role of anchoring the innings.

Meanwhile, the emergence of the uncapped 18-year-old, Sanju Samson, has come as a big boost for Rajasthan. His impressive temperament in pressure situations and his ability to keep the scoreboard ticking have provided fresh impetus to the middle order.

Shane Watson's good form with the bat and his return as a bowler have allowed Rahul Dravid to play an extra batsman in the side. Brad Hodge, whose finishing prowess was sorely missed in the loss to Kolkata, should make his way into the side in place of either Owais Shah or Brad Hogg.

James Faulkner's form, Siddharth Trivedi's accuracy, Stuart Binny's nagging length and Ajit Chandila's astuteness give Dravid the option of either backing them with an extra spinner or a seamer, depending on the strength of the opponent.

Rajasthan's brand of cricket, batting first specifically, has been about batsmen putting up enough runs for the bowlers to put up a fight. They are likely look to employ the same formula against Pune.

In spite of having some of the best names in Twenty20 cricket in their dugout, Pune have failed to work out a winning formula. While they were outplayed by Chris Gayle's unbeaten 175 in Bangalore, they have self-destructed in most of the other games.

They squandered winning positions in both their games against Sunrisers Hyderabad and against Delhi Daredevils in Raipur, the bowlers failed to put a brake on David Miller and Mandeep Singh in Mohali and wickets kept falling at the other end as Robin Uthappa's stroke-filled 75 in their home game against Royal Challengers Bangalore went in vain.

Aaron Finch's three half-centuries, two of them in a winning-cause, in nine games has not only made him the batting leader of the side but has also led to Angelo Mathews stepping down from captaincy. That Pune have only four half-centuries and another ten scores of above 30 sums up their batting effort.

With 12 wickets, Ashok Dinda is Pune's most successful bowler but his erratic bowling in the death has been costly to the side. Except for Bhuvneshwar Kumar, and to an extent Rahul Sharma, none of the other bowlers have impressed consistently. On most occasions they have started well, before failing to maintain the pressure and conceding the momentum to the opponent at crucial junctures.

With nothing to lose, Pune could start experimenting for the next season by trying out a few new Indian faces, such as Parveez Rasool, giving them the licence to express them.

Meanwhile, Rajasthan, with six games - three at home - in hand, have a fair chance of finishing as one of the top two sides on the points table. It would not only give them two attempts to qualify for the final but will also guarantee them a spot in the Champions League Twenty20.