Jacques Kallis was pleased with the team-effort under pressure, against Rajasthan and says Kolkata can go on to showcase winning performances. 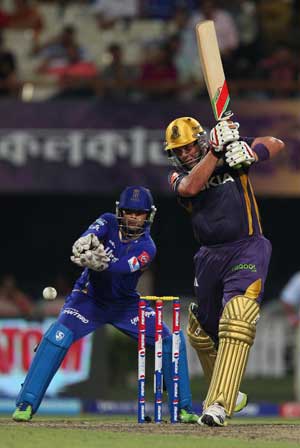 Under pressure to start and maintain a winning-streak to stay alive in IPL 6, Kolkata Knight Riders defeated Rajasthan Royals by 8 wickets on Friday. While Yusuf Pathan led the charge, Jacques Kallis played a solid supporting role to chase down the target of 133. For the Protean, it was an example of sensible batting that needs to continue.

While Pathan remained unbeaten on 49 off 35, Kallis too was in the middle till the end and scored 33 off 30. "We were expecting a total between 145 and 150. I thought the bowlers did well to restrict Rajasthan first. Then, it was sensible batting," he said after the match. "We knew we had to keep wickets in hand. Yusuf was striking the ball well and we had our gameplan in place."

Asked about Kolkata's gameplan for the rest of the tournament, Kallis said that his team still had a chance to make the playoffs. "We had a string of victories last year. We can still do it now. Pressure is on us and we played well today. Unfortunate though that this was our last home match."

Team-owner Shah Rukh Khan was present at the stadium for the match and Kallis said having him cheer for the side helps too. "Shahrukh is a magnificent man. Having him helps."

Kolkata now have four wins from 11 matches and are seventh with eight points.