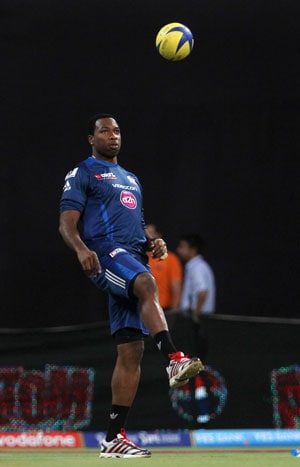 Call it 6 sixes in 7 balls or the third-fastest fifty in tournament history, Kieron Pollard smashed the living daylights out of Sunrisers Hyderabad to take Mumbai Indians to the top of the Indian Premier League table on Monday.

Mumbai were in a spot of bother, needing 62 runs from 24 balls when the 6-foot-5-inch Trinidadian decided to cut loose.Â  He, hammered 8 sixes and 2 fours in all in his 27-ball unbeaten 66. The 31-ball 85-run unbeaten stand between Pollard and skipper Rohit Sharma saw 50 runs being scored in the 17th and 18th overs, bowled by Thisara Perera and Amit Mishra, respectively.

"It was an important game for us, I backed myself, it's just a matter of chasing the right bowler, Perera was the unlucky one. I haven't fired only in the last couple of games. Dwayne Bravo is one of my best friends, he is always backing me," he said after getting the Man-of-the-Match award at the Wankhede Stadium.

But his arrival to Mumbai's fortress, where they been unbeaten in all seven games so far, was not the smoothest. Pollard was forced to miss the previous game against Pune Warriors due to injury and the fear of injury still haunts the tenacious all-rounder.

"My fingers have been battered, I have to tape all of them but the right hand is my bowling hand, so I can't do that. I do not want to miss out on the remaining matches due to injury. You never know when a career-ending injury would come. I am a power hitter but I love to bat as well. You have to take the good times, and the bad times," he said with a wry smile.

With one hand already in the playoffs after topping the table with 20 points from 14 games, Mumbai's skipper Rohit Sharma too praised his maverick partner.

"It was an important game for us but the way we finished it off, hats off to Pollard. It was a great innings by him. I did not have to tell anything to Pollard when he came out to bat. The wicket here has been great and if we have wickets in hand, then any target can be chased. We want to play the next two games confidently," he said after the match.

On the other hand, Cameron White was perplexed after his side's best score away from home went in vain.

"I thought we posted a very good score but Pollard changed the complexion of the match. It was great to watch Steyn vs Pollard but he managed to play Steyn out. Malinga bowled well at the death but it was a wonderful batting surface. We did not take too many wickets up front. We have to win 2 out of 2 to put pressure on Bangalore," he said with a deep sigh.

Comments
Topics mentioned in this article
Cricket IPL 2013 Cameron White Dwayne Bravo Kieron Pollard Sreesanth RG Sharma
Get the latest updates on ICC T20 Worldcup 2022 and CWG 2022 check out the Schedule, Live Score and Medals Tally. Like us on Facebook or follow us on Twitter for more sports updates. You can also download the NDTV Cricket app for Android or iOS.