Sunil Gavaskar feels big names have not fired for the side and it's time that the youngsters in Maharasthra are given a chance. This will help them, the team and also increase support base. 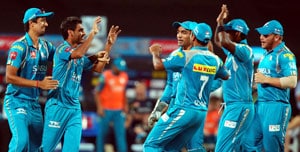 Sunil Gavaskar feels big names have not fired for the side and it's time that the youngsters in Maharasthra are given a chance. This will help them, the team and also increase support base.

While Pune Warriors' director Abhijeet Sarkar told NDTV that he hasn't yet thought of changes in the team, former India cricketer Sunil Gavaskar has a solution for the shoddy performance - look at players from Maharashtra and include them in the squad.

Pune Warriors on Saturday, suffered their 12th defeat this season when they surrendered to Mumbai Indians. Lying at the bottom of the points table with just two wins from fourteen matches, the team has been unable to make changes count despite even changing captains mid-way.

"I do not think they could have made much changes through the course of IPL. What I would like them to do though is look at talent in Maharashtra itself. They are a Pune team and Maharashtra won the U-19 tournament a few years back. They have to look at some of those players - bowlers and batsmen," said Gavaskar.

The veteran cricketer said that having local players will also encourage local fans to come out and support the side and the exposure will help both the youngsters as well as the team.

Gavaskar backed his suggestion by saying that including players 'from here and there' has not worked for the side. "Some players in the side are not making any contribution and not just this year but have been done nothing the previous year as well. You cannot have bad patches for two or three seasons."

Marquee players including Yuvraj Singh have been unable to showcase their talents so far this season and earlier this week, NDTV cricket expert Dean Jones had said that the south-paw won't find a place in the side next season. What also hurt the team was the absence of Michael Clarke leading to a confused leadership - the team has had three captains.

"I said from the get-go at the start of the IPL that the team is going to miss him (Clarke). You miss your captains big time, particularly quality players like Michael Clarke. Rohit Sharma has done a wonderful job for Mumbai and so has Dhoni for Chennai and Dravid for Rajasthan. A leader is everything in your team," former Australia cricketer Jones said.

Clarke had pulled out of the tournament due to a sore back.

Comments
Topics mentioned in this article
Cricket Gary Kirsten Anil Kumble IPL 2013 Michael Clarke Yuvraj Singh Pune Warriors India Dean Mervyn Jones Sunil Manohar Gavaskar
Get the latest updates on ICC T20 Worldcup 2022 and CWG 2022 check out the Schedule, Live Score and Medals Tally. Like us on Facebook or follow us on Twitter for more sports updates. You can also download the NDTV Cricket app for Android or iOS.