KKR rode on skipper Gautam Gambhir's 50 and a late surge by Ten Doeschate (31 off 21) to post a challenging 152 for six, and then bowled out Pune for 106 in 19.3 overs to register a convincing 46-run win here on Thursday. 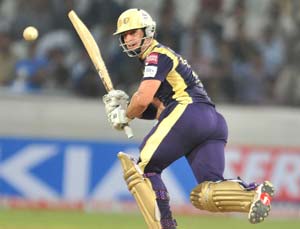 Playing his first game in the ongoing IPL, Ryan ten Doeschate proved to be the game-changer in Kolkata Knight Riders' win over Pune Warriors here but the batsman does not feel that he was the missing link in the line-up of his inconsistent team.

"No, I wouldn't say that. There are obviously a lot of good international players here. Like when I come in, a quality player like Ryan McLaren has to sit out. So you have got to wait your turn," he said.

"And that is probably one of the toughest things you have to do, as you have got to stay fresh and stay ready (for when your turn comes). That is the hard part about being in a group of eight or nine good overseas guys like in KKR," ten Doeschate was quoted as saying by iplt20.com.

KKR rode on skipper Gautam Gambhir's 50 and a late surge by Ten Doeschate (31 off 21) to post a challenging 152 for six, and then bowled out Pune for 106 in 19.3 overs to register a convincing 46-run win here on Thursday.

It was KKR's fifth win in 13 games but the South African-born Dutch cricketer said his side has not done too badly.

"We have always tried to use it in a positive way. I don't think we have done particularly badly this year. I just don't think we have won crucial moments of the game. However, we have certainly channelled the pressure of being defending champions into a way that would work out for us this year."

The batting all-rounder admitted that he has been struggling with his bowling.

"I have struggled a bit with my bowling. But I tend to work very hard at it. You have got to adapt all the time. Since I don't have a lot of pace, I have to bowl wisely. So I'm always trying to find ways to bowl better that way," ten Doeschate, who holds the world record for the highest batting average of 67.00, said.

Ten Doeschate said the experience of playing in the IPL is incomparable.

"You just can't compare the fan following here (to any other place). Also, the way the teams look after you is great. The owners and the staff take care of you, and that makes the experience incomparable," he insisted.

Comments
Topics mentioned in this article
Cricket IPL 2013 Gautam Gambhir Shoaib Akhtar Ryan ten Doeschate Ryan McLaren Kolkata Knight Riders Pune Warriors India Ajaysinhji D. Jadeja
Get the latest updates on ICC T20 Worldcup 2022 and CWG 2022 check out the Schedule, Live Score and Medals Tally. Like us on Facebook or follow us on Twitter for more sports updates. You can also download the NDTV Cricket app for Android or iOS.