The Jammu &amp; Kashmir player initially did not realize that the logo belonged to an alcohol company, a team sponsor. Once he did, Rasool made it clear that he just cannot endorse it. 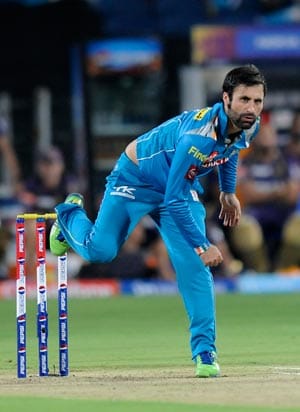 What's common between South African batting star Hashim Amla and rookie Jammu and Kashmir and Pune Warriors' off-spinner Parvez Rasool? Apart from being cricketers, both have refused to endorse liquor brands on their team clothing because of religious sentiments.

According to a report in the Indian Express, the Pune Warriors' player has removed the logo of a liquor brand - an IPL sponsor - from his team jersey. The bowler who debuted for Pune earlier this week and called it the "proudest day of his life," has reportedly informed the team management of his decision to not sport the logo as "it hurts his religious sentiments."

The 24-year-old said he initially did not realize that the logo belonged to an alcohol brand. When he did, he took 'immediate action.'

"I used tape to hide the logo and people were initially wondering why I was doing this. I told them that it is because my religion prohibits alcohol consumption. I can't endorse liquor brand. For me my belief is paramount. My family is happy with the decision," he said.

This is not the first such instance of a cricketer refusing to promote an alcohol brand in any way. Amla had refused to play till the team's official sponsor was removed from his jersey. This was because the company was a well-known beer brand.

India's top off-spinner Harbhajan Singh was also in trouble for letting his hair down and endorsing a liquor brand.

Comments
Topics mentioned in this article
Cricket IPL 2013 Harbhajan Singh Zimbabwe Cricket Team Virat Kohli Parvez Rasool Pune Warriors India Ian Dev Singh JK KER
Get the latest updates on ICC T20 Worldcup 2022 and CWG 2022 check out the Schedule, Live Score and Medals Tally. Like us on Facebook or follow us on Twitter for more sports updates. You can also download the NDTV Cricket app for Android or iOS.