Dravid said the bowlers did their job by restricting Mumbai to a gettable total of 166 but the batsman squandered their opportunities. 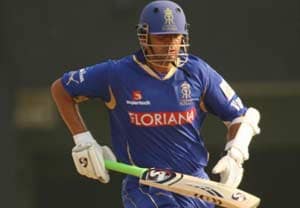 Blaming his batsmen for the 14-run loss to Mumbai Indians, Rajasthan Royals captain Rahul Dravid said his side's chances of finishing among the top-two ahead of IPL playoffs have been dented considerably.

"This loss was a big one for us. Obviously our net run rate is below both Mumbai Indians and CSK's. We needed this win if we wanted to finish in top two, now we have to rely on one of them losing very badly. They are pretty good sides, they don't lose very easily," Dravid told reporters in a post-match press conference last night.

"You never know with a bit of luck we win against Hyderabad and if one of them (MI and CSK) loses badly, we can still finish in the top two but it is looking difficult," he said.

Dravid said the bowlers did their job by restricting Mumbai to a gettable total of 166 but the batsman squandered their opportunities.

"We did a brilliant job at the back. A side like Mumbai Indians, with the kind of hitters that they have at the back-end after they got off to a flier, to restrict them to 166 was an amazing effort from the boys on the field," Dravid said.

"I thought all the three guys ( James Faulkner, Kevon Cooper and Shane Watson) who bowled at the death were superb and deserve a lot of credit. Just sad that they ended up on the losing side because we didn't bat really well in the first six," he added.

Chasing 167 runs, the Royals lost four batsmen in the first six overs with just 29 on the board.

Three teams -- Chennai Super Kings, Mumbai Indians and Rajasthan Royals -- have already qualified for the play-offs. The teams finishing in the top two of the league table have an advantage as they get two opportunities for making it to the final.

Dravid was unlucky last night as he was given caught behind when his bat clearly missed the ball, but the former India skipper felt such things are part of the game.

"I think, in my career I have played for a long time and I have been lucky as well. At times I have been out and I have not been given not out as well. I am a firm believer that it all sort of evens out in the end. That's part and parcel of the game. I have no regrets about it," he said.

The 40-year-old said he was hopeful of his team overcoming the target but Lasith Malinga dented its hopes with impeccable bowling at the death.

"They (Mumbai) bowled really well in the last four. I thought even in the last four with 45 runs to get and two of our biggest hitters (Brad Hodge and Stuart Binny) and finishers in the game, you can win some of those games. But they had Malinga. Probably the best in the business at that stage. It was always going to be difficult," he said.

Rajasthan have tweaked their batting order quite a lot in this tournament and Dravid admitted that it didn't pay off yesterday. He hinted that a few changes could be made in the next game against Sunrisers Hyderabad.

Royals' opener Ajinkya Rahane was dropped from the Indian squad for the ICC Champions Trophy but Dravid believes the 24-year-old has a bright future.

"He keeps scoring runs. He is brilliant on field. Got a great attitude. Ajinkya is going to have a good career ahead of him. Sometimes you are unlucky and you miss out but I am sure his time will come," he said.

He also heaped praises on his Karnataka teammate Stuart Binny for his performances this season.

"He has developed a lot as a cricketer. The great thing is the opportunities he has got. Over the last couple of years here at Rajasthan he has got quite a few opportunities to play. I think he feels a lot more confident in our side. He gets to bowl, he gets to bat," he said.

Comments
Topics mentioned in this article
Cricket IPL 2013 Rahul Dravid Rajasthan Royals Mumbai Indians
Get the latest updates on ICC T20 Worldcup 2022 and CWG 2022 check out the Schedule, Live Score and Medals Tally. Like us on Facebook or follow us on Twitter for more sports updates. You can also download the NDTV Cricket app for Android or iOS.