NDTV cricket experts Farokh Engineer and Dean Jones say the Bangalore bowlers are not confident of defending even high scores. Both feel RCB must utilize the experience of left-arm spinner Daniel Vettori. 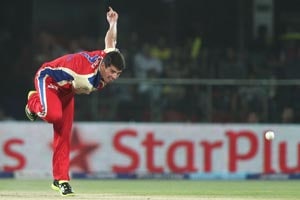 Royal Challengers Bangalore have been a formidable side this edition of Indian Premier League. Bowling though is a concern that threatens to undermine the efforts of the batsmen.

Against Delhi Daredevils on Friday evening, skipper Virat Kohli led the batting with his quick-fire 99 off 58. The knock propelled the team to 183 at the Feroz Shah Kotla but Delhi managed to reach within touching distance of the target - losing by four runs. It was not all about steady batting from the hosts but also the lack-luster effort of Bangalore's bowlers.

"Virat Kohli was good and his bowling changes too were good. But his bowlers were just dreadful," former India cricketer Farokh Engineer told NDTV in the post-match analysis. "They were bowling in the wrong areas. You just don't bowl on those good length spots at a time the batsman are looking to hit big. Just bowl the old-fashioned yorker."

Former Australia cricketer Dean Jones agreed and said defence is as important in a T20 match as reaching high scores.

"Even if they (Royal Challengers Bangalore) score 225, you feel they are not going to get an easy win. What I would do is drop Moises Henriques for Daniel Vettori," he said. While Vettori has not played a single match this season despite leading the side in the past, Henriques cost his side 21 off his two against Delhi and has had an economy rate of about 8.21 so far this season.

With the play-offs approaching, both Jones and Engineer felt Vettori's experience can help the side.

"Daniel Vettori is an experienced bowler. He knows where to pitch the ball, he'll bowl in the block-hole," said Engineer.

There have been some good performances with the ball - Jaydev Unadkat claimed a fiver against Delhi - but the bowling has to improve drastically as a unit, going forward, if the team has to make a dominant impression.