According to a Cricket Australia (CA) media release, Smith is not likely to be considered for the remaining IPL matches and thus it was best in the player's interest to return for treatment. 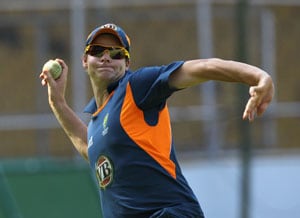 Australian all-rounder Steven Smith has been ruled out of Pune Warriors' remaining matches in the IPL and he is returning home for treatment of a lower back injury.

Cricket Australia said in a statement that Smith has been released by Pune Warriors and he would be returning home for treatment of a lower back complaint in a bid to recover for next month's Australia A series in England.

"Smith, who has been playing for the Pune Warriors, was not likely to be considered for any of the remaining matches and with the approval of Cricket Australia, he will be returning home for treatment," the CA said.

"While the injury is minor, Pune respected Smith's upcoming playing commitments and advised it was best for him to return to Australia for treatment," the statement said.

Smith has been named vice-captain to Brad Haddin for the Australia A games, which begin on June 7, the CA expects him to be fit for the series in England.

"CA expects Smith to be fully fit for his upcoming commitments with Australia A, where he will be vice-captain," the statement added.

Smith missed out on a place in Australia's Ashes squad despite being one of the strongest performers with the bat on the recent Test tour of India, where his footwork against the spinners put him second only to captain Michael Clarke on Australia's batting averages.

He has also topped the average for Pune Warriors so far in their IPL campaign with 161 runs at 39.75.

Comments
Topics mentioned in this article
Cricket IPL 2013 Pune Warriors India Stephen Barry Smith
Get the latest updates on ICC T20 Worldcup 2022 and CWG 2022 check out the Schedule, Live Score and Medals Tally. Like us on Facebook or follow us on Twitter for more sports updates. You can also download the NDTV Cricket app for Android or iOS.