Indian Premier League: How all four playoff spots are still up for grabs

While it's not possible for any combination of four other teams to beat Chennai and Rajasthan on points alone, NRR could end up playing a crucial role in qualification. Less than a week left in the league stage of the Pepsi IPL 2013, three teams have 18 or more points. In 2012, the fourth team to qualify for the playoffs - Chennai Super Kings - did so with just 17 points.

Yet, things are so competitive in the top half of the table in 2013 that even the top two teams on the table at present aren't guaranteed a passage through to the last four. Chennai are sitting at the top with 20 points and a Net Run-Rate that is ahead of Rajasthan Royals by the wafer thin margin of 0.045.

While it's not possible for any combination of four other teams to beat Chennai and Rajasthan on points alone, NRR could end up playing a crucial role in qualification. Technically, the two table-toppers are still not assured of a playoff spot. In fact, the only thing that's guaranteed at this point is that neither Delhi Daredevils and Pune Warriors India are in the qualification race.

Even Kolkata Knight Riders and Kings XI Punjab could technically still qualify, though they need a lot of stars to align for that to happen. If, for example, Sunrisers Hyderabad or Royal Challengers Bangalore win even one of their remaining games, Punjab and Kolkata will both be out even if both win every game they have from here on.

Here's how the top seven teams stack up:

Current Situation: They have 20 points with two games in hand and a positive Net Run Rate of 0.551. If circumstances so arrange themselves, though, they could end up not qualifying - which would certainly be classed as the shock of the tournament. If Chennai lose their remaining games against Delhi and Bangalore by big margins, they will stay on 20 points and have a considerably reduced NRR. It is then possible for Mumbai Indians and Bangalore to catch them up on 20 points, while Hyderabad and Rajasthan could move up to 22 points. That will create an NRR shootout between Chennai, Mumbai and Bangalore.

What they need to do: Chennai will be guaranteed a spot in the final four if they win at least one of their two remaining matches. If they win both, they'll qualify as one of the top two teams. They could go through even if they lose, but they will then have to depend on other results going their way to some extent and limit the margin of defeats.

Upcoming matches: Against Delhi on May 14 in Chennai; against Bangalore on May 18 in Bangalore.

Current Situation: Like Chennai, Rajasthan also have 20 points with two games in hand, and their NRR is a positive 0.506. They have two matches, both tough away assignments against fellow playoff contenders Mumbai and Hyderabad. Lose both and they'll be in a situation similar to Chennai, hoping that other results don't go against them.

What they need to do: Rajasthan face the same equation as Chennai - win one match and a spot is guaranteed, win both and a top-two finish is theirs. The difference is, Chennai have a match at home in hand against the relatively weaker Delhi outfit, while Rajasthan face tougher tests.

Upcoming matches: Against Mumbai on May 15 in Mumbai; against Hyderabad on May 17 in Hyderabad. 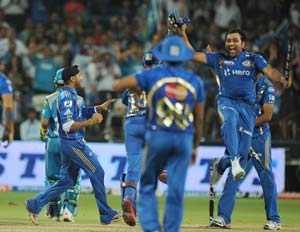 Current Situation: They have 18 points with three matches in hand and the best NRR of all teams - a positive 0.648. They also have the luxury of two matches at home, where they've won six out of six so far. Mumbai could be in some trouble if they win only one match and lose the other two by big margins.

What they need to do: Mumbai will be safe if they win two of the remaining three matches. They could possibly make it even if they lose all three, but if they are targeting a top-two finish, as they will be, they'll need to win at least two more matches.

Current Situation: They have 16 points with two matches in hand - both at home - and a positive run-rate of 0.475. What Bangalore must guard against is their tendency to bottle it in crunch situations. They are one of the teams with a so-far spotless home record with six wins from six, but one of their home matches is against Chennai, who've had the better of them in nearly every crunch game in IPL history.

What they need to do: The equation is simple for Bangalore: they must win both remaining matches and do it as handsomely as they can. Bangalore aren't guaranteed a spot even if they win both matches as of now and might face an NRR shootout, hence the need to win big.

Upcoming matches: Against Punjab on May 14 in Bangalore; against Chennai on May 18 in Bangalore.

Current Situation: They have 16 points with three matches in hand but of the top five, theirs is the only NRR in the negative with -0.092. Losing more than one match of their remaining three could prove disastrous, unless Bangalore lose both.

What they need to do: Hyderabad must aim at winning all three matches to feel safe.

Upcoming matches: Against Mumbai on May 13 in Mumbai; against Rajasthan on May 17 in Hyderabad; against Kolkata on May 19 in Hyderabad.

Kolkata have two matches and Punjab have three with none against each other. If both sides win all matches, they'll still end up on 16 points each. That will only be enough if Hyderabad and Bangalore lose all matches, leaving all four teams locked on 16 points. The equation for Kolkata and Punjab is very simple: aim to win by as big a margin as possible, and pray that Bangalore and Hyderabad continue to lose.