Rajiv Shukla, who is vice president of BCCI in India, discounted the rumors by saying, India will take part in the Champions Trophy. 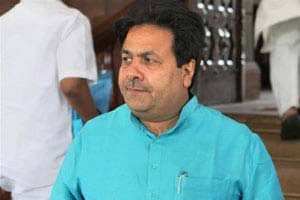 A top Indian cricket board official denied on Monday that India would pull out of the Champions Trophy if the ICC told its ethics committee to look into the controversial selection of Laxman Sivaramakrishnan to its cricket committee.

Rajiv Shukla, who is vice president of Board of Control for Cricket in India, discounted the rumors on NDTV by saying, "India will take part in the Champions Trophy."

Former Indian Premier League chairman Lalit Modi had tweeted on Monday that "Twitter is buzzing with bcci threatening to pull out of champions trophy. If ICC were to refer Tim May complaint to ethics committee."

Sivaramakrishnan replaced May on the cricket committee after the captains of 10 Test playing countries voted twice.

Last week the ICC said it had received a written request from the Federation of International Cricketers' Association (FICA) to refer the election process to its ethics officer and said "this request is being considered."

The FICA, of which May is the chief executive, feared that five countries may have told their captains to vote for Sivaramakrishnan - or even ordered them to change an initial vote for May - to follow the line of India.

And Modi accused BCCI president N. Srinivasan of manipulating the voting process in another tweet.

"This just goes to show what power hungry Srini will do destroy cricket for personal gain or to bury what he does. Shameful to say the least," Modi tweeted. "Hope ICC sends a strongest message back to Bcci. We will protect the game and do the inquiry. We will not cow down to Bcci. Enough is enough."

Comments
Topics mentioned in this article
Cricket ICC Champions Trophy 2013 India Cricket Team IPL 2013 Laxman Sivaramakrishnan
Get the latest updates on ICC T20 Worldcup 2022 and CWG 2022 check out the Schedule, Live Score and Medals Tally. Like us on Facebook or follow us on Twitter for more sports updates. You can also download the NDTV Cricket app for Android or iOS.