Have been waiting for this day: Dinesh Karthik on Champions Trophy inclusion

Karthik, whose last of 52 ODIs was against Sri Lanka in August 2010, has been in great form for the Mumbai Indians in the ongoing Indian Premier League (IPL). 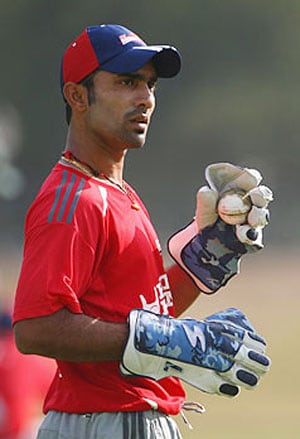 The 27-year-old wicketkeeper batsman heaved a sigh of relief on Saturday after he was selected in India's 15-member squad for next months' Champions Trophy in England and Wales.

"I am really happy at the moment. I was waiting for this day for sometime now. It means a lot to me," Karthik told IANS.

Karthik, whose last of 52 ODIs was against Sri Lanka in August 2010, has been in great form for the Mumbai Indians in the ongoing Indian Premier League (IPL). He has scored 331 runs, including two half-centuries, from 10 matches with a highest score of 86.

Karthik, who turns 28 next month, however, feels IPL was not the sole reason behind his selection. He also had an impressive first class season. Karthik scored 577 runs from eight Ranji Trophy matches at an average of 64 and his highest was 187.

"I would like to believe that my performances in other domestic tournaments also played a part. I have been able to carry my good from into the IPL," he said.

With two keepers in the squad, including skipper Mahendra Singh Dhoni, Karthik's ability to play anywhere in the batting order gives him a fair edge.

"I have always been confident in my batting ability. Besides that, I am a decent fielder. So, I look forward to doing in well in any format. Nobody can replace someone like Dhoni," Karthik said.

For the time being, Karthik wants to focus on helping Mumbai Indians getting their maiden IPL title.

"I don't really want to think about that (Champions Trophy) too much. Just feels great to be back in the team. For now, the focus remains on doing well for the Mumbai Indians and helping them win the IPL trophy," he said.

Comments
Topics mentioned in this article
Cricket ICC Champions Trophy 2013 MS Dhoni Dinesh Karthik IPL 2013 Sreesanth Mumbai Indians
Get the latest updates on ICC T20 Worldcup 2022 and CWG 2022 check out the Schedule, Live Score and Medals Tally. Like us on Facebook or follow us on Twitter for more sports updates. You can also download the NDTV Cricket app for Android or iOS.