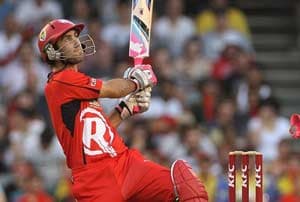 Little-known Australian all-rounder Glenn Maxwell was the only million-dollar buy in a low-key IPL players' auction where franchises opted to put their money on unheralded names instead of established stars, most of whom went unsold here today.

The 24-year-old Maxwell stole the thunder grabbing a whopping USD one million (Rs 5.3 crore) deal with Mumbai Indians, while among the Indians, all-rounder Abhishek Nayar, and pacers R P Singh and Jaydev Unadkat invited unexpectedly high bids in the auction where only 37 of the 108 players in the fray managed to find buyers. (Catch IPL auction highlights)

The giants of the game who failed evoke much interest from the franchises included Australian captain Michael Clarke and his predecessor Ricky Ponting. Both of them were marquee players but were sold on their base price of USD 400,000 (Rs 2.1 crore) to Pune Warriors and Mumbai Indians respectively.

In contrast, there was a fierce bidding war for Maxwell in which Mumbai pipped Hyderabad Sunrisers to clinch the player.

"He is an upcoming youngster. He can bat, bowl and I think he is a great fielder. We had thought of some names before we came here and he was one of them," said Mumbai owner Nita Ambani on the logic behind making such a high bid for the youngster, who is just eight ODIs and nine T20s old in the international arena. (The Auction list on the run)

Currently playing against the West Indies in an ODI series, Maxwell was ironically out for a first-ball duck in Perth while franchises bid for him here.

India's uncapped domestic stars Jaydev Unadkat and Pankaj Singh were among the big gainers in what turned out to be a rather bizarre buying pattern which saw franchises opting mostly for untested players, who have not yet made a mark in the international arena. (Updated teams' list)

South African all-rounder Christopher Morris, who has played just one Twenty20 international, quite literally struck gold at the auction by fetching USD 625,000 (Rs 3.3 crore) after starting with a measly base price of USD 20,000.

The 25-year-old Morris was bought by Chennai Super Kings after an intense three-way bidding war with Mumbai Indians and the Royal Challengers Bangalore.

The unusual pattern continued with little-known Sri Lankan off-spinner Sachithra Senanayake going much beyond his base price of USD 50,000.

The franchise that initially bid on him were Mumbai Indians and the Chennai Super Kings before Kolkata Knight Riders entered the fray to raise his price tag to USD 625,000 (Rs 3.3 crore) and snatch him from CSK.

Australian fast bowler Nathan Coulter-Nile was put on sale at a base price of USD 100,000 but went for USD 450,000 to Mumbai Indians, who outbid the Rajasthan Royals.

The 25-year-old is yet to make his international debut and currently turns up only for Western Australia and Perth Scorchers in his domestic circuit.

Another uncapped player who triggered a bidding war was promising Australian pacer Kane Richardson. The 21-year-old, whose base price was USD 100,00, was ultimately bought by Pune Warriors for USD 700,000 (Rs 3.7 crore).

Mumbai all-rounder Abhishek Nayar, who performed consistently in the domestic arena, went to Pune Warriors for USD 675,000 (Rs 3.5 crore), a huge improvement on his base price of USD 100,000.

Another Indian pacer who managed to get a good deal was Manpreet Gony, who went for USD 500,000 (Rs 2.6 crore) to Kings XI Punjab.

As the auction progressed, there were more surprises in store as the likes of Sri Lankan mystery spinner Ajantha Mendis and forgotten Australian pacer Dirk Nannes triggered bidding wars which fetched them price tags much more than their base prices.

Mendis was bought by Pune Warriors for USD 725,000 (Rs 3.8 crore). The bowler, who is no longer the formidable force that he was when he first broke into the scene, came to the auction with a modest base price of USD 50,000.

It was a surprise given that his base price was USD 100,000 and he has not done anything significant to merit such a high price tag.

Among others who would be smiling all the way to bank are Maxwell's compatriot Luke Pomersbach. The troubled player, who has battled alcoholism, fetched a deal of USD 300,000 (Rs 1.5 crore) with Kings XI Punjab. The 28-year-old batsman started with a base price of USD 50,000.

West Indies captain Darren Sammy was purchased by Hyderabad Sunrisers for USD 425,000 (Rs 2.2 crore), while Australian James Faulkner also had a good day at the auction with Rajasthan Royals shelling out USD 400,000 (Rs 2.1 crore) for him.

Among others who got good deals were Australia's Moises Henriques (sold for USD 300,000 to Royal Challengers Bangalore), temperamental New Zealand batsman Jesse Ryder(USD 260,000 to Delhi Daredevils).

Indian pacer Sudeep Tyagi and Kiwi Nathan McCullum were roped in by Hyderabad Sunrisers at their respective base prices of USD 100,000.

The all-rounders drew the franchises' interest with most of them getting decent packages.

But it it was disappointment for the wicketkeepers as just one of them, Quinton de Kcok (Hyderabad Sunrisers for USD 20,000), managed to find a buyer, that too in the final round.

The contracts offered at this year's auction are for just this season as all the players will go under the hammer next year.

The unsold list grew longer as the auction progressed with Australian Doug Bollinger and Sri Lankan Rangana Herath joining the prominent names who failed to evoke the franchises' interest.

New Zealand's veteran all-rounder Jacob Oram, who went unsold in the initial bidding, was reselected and picked up by Mumbai Indians for his base price of USD 50,000.

Similar was the case of South African wicket-keeper Quinton de Kock who was bought by Hyderabad Sunrisers for his base price of USD 20,000.

Another comeback man was Australian all-rounder Daniel Christian who was bought by Royal Challengers Bangalore at his base prise of USD 100,000 in the final round of bidding.

Australian pacer Clint McKay was grabbed by Hyderabad Sunrisers in the final round for his base price of USD 100,000.

"We tried to maintain transparency. I don't think anybody has got any complaints to make," IPL Chairman Rajeev Shukla said at the end of the proceedings.

The nine franchises spent a total of USD 11.89 million in auction. RCB bought as many as seven players, Sunrisers six, while Chennai Super Kings and Mumbai Indians bought five players each.

Baby On Board: Sania Mirza Embarks On First Grand Slam Bid As A Mother