Don't criticise IPL, it's making money for everyone: Anurag Thakur

Thakur said BCCI will wait for evidence from the police before deciding the quantum of punishment to be handed down to the errant players. 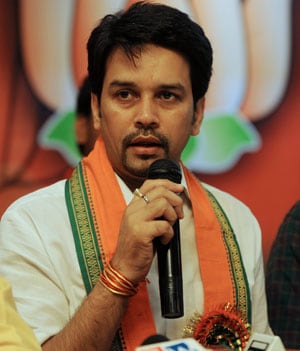 Hitting out at the scandal-hit IPL's critics, BCCI Joint Secretary Anurag Thakur on Friday said former players, who are lambasting the event in the wake of the ongoing spot-fixing controversy, are themselves minting money from the cash-rich league.

"Even ex-cricketers are earning crores of rupees...they are getting handsome amounts from it and still criticising it. If they consider it bad money, they should not receive it," said Thakur when asked about the flak that the league is drawing right now.

A special cell of the Delhi police arrested India pacer S Sreesanth and his Rajasthan Royals teammates -- Ajit Chandila and Ankeet Chavan -- for indulging in spot-fixing in at least three IPL matches as per arrangements with bookies.

Thakur said BCCI will wait for evidence from the police before deciding the quantum of punishment to be handed down to the errant players.

"We have already suspended the three players arrested by Delhi Police yesterday. We are waiting for the evidence from the police to go further in punishing them," he said.

Thakur, however, admitted that law does not permit for severe punishment cases like spot-fixing.

"We are depending on the law of British era. We need a change in them. We can't comment further till we get the evidence," he said.

Thakur claimed the IPL has helped take the scenic beauty of Dharamsala to over 190 countries.

He said the state government should provide better roads and air link to the city.

Thakur said Mumbai Indians batsman Sachin Tendulkar, who is here for an IPL match against Kings XI Punjab, has been left mesmerised by Dharamsala's beauty.

Comments
Topics mentioned in this article
Cricket IPL 2013 BCCI Ankeet Chavan Sreesanth
Get the latest updates on ICC T20 Worldcup 2022 and CWG 2022 check out the Schedule, Live Score and Medals Tally. Like us on Facebook or follow us on Twitter for more sports updates. You can also download the NDTV Cricket app for Android or iOS.