The Daredevils, who made the play-offs last season, are languishing at the second last position in the nine-team competition having lost 11 out of their 14 games this year. 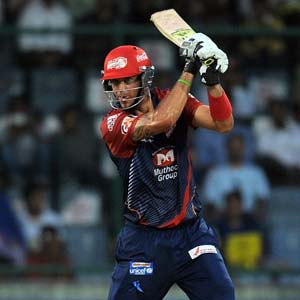 The absence of Kevin Pietersen and Jesse Ryder coupled with injuries to some key players at the start of the season were some of the reasons for Delhi Daredevils disastrous campaign in the ongoing Pepsi Indian Premier League, said coach Eric Simons.

The Daredevils, who made the play-offs last season, are languishing at the second last position in the nine-team competition having lost 11 out of their 14 games this year.

"We were in the rough losing the first three games but our players very honestly kept trying. But at the end of the day, being professionals you need to do the right things at the right time," Simons said after Daredevils slumped to its 11th defeat in IPL 6 after losing by 33 runs to table toppers Chennai Super Kings here last night.

"I think we missed KP (Kevin Pietersen) and Ryder and this was one of the main reasons (for poor show). Even in our first three games a lot of our players were coming from injuries. At that time even Umesh (Yadav) was injured and Mahela (Jayawardene) had a broken finger.

"You need to take into account these things. It is a tough situation but such things are part of the challenge," he said.

The coach feels it the batting department which has let the team down this year.

"The batsmen have accepted their responsibilities. The bowlers have done fairly well restricting the oppositions to reasonable scores and almost defended 150 odd runs. We have done a decent job in bowling," Simons said.

"But our problem was that we lost wickets early. We have not got through to the 10th over with one or two top batsmen at the wicket. And, this was basically the problem," he insisted.

Simons said it was frustrating to see his wards committing the same mistakes match after match.

"We did not have our captain (Jayawardene) with us and this makes a lot of difference. I think we did the same mistakes. I think we could have definitely got the total of 168 scored by Chennai," he said about yesterday's game.

"I do not think we did a bad job. May be there were some mistakes in execution but to restrict a team to this total and especially a side like Chennai Super Kings was not a bad job at all."

Comments
Topics mentioned in this article
IPL 2013 Cricket England Cricket Team Kevin Pietersen Michael Clarke Ishant Sharma Jesse Ryder Delhi Daredevils
Get the latest updates on ICC T20 Worldcup 2022 and CWG 2022 check out the Schedule, Live Score and Medals Tally. Like us on Facebook or follow us on Twitter for more sports updates. You can also download the NDTV Cricket app for Android or iOS.