The Delhi lad shared a 95-run stand with David Warner to register his side's third win the competition. 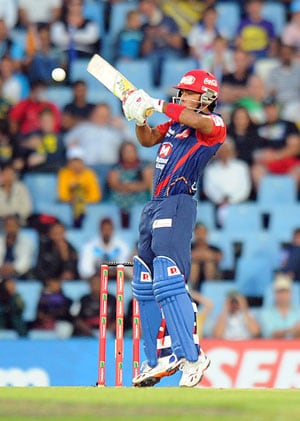 With Delhi Daredevils tasting back to back wins of late, the promising young batsman Unmukt Chand feels his side needs to keep the momentum and extend its good run in the remaining matches of the Indian Premier League.

"In 20-20 matches, team's momentum plays a very important role. We were not finding the momentum earlier in the contest but now after posting back-to-back wins here, we are on the track," Unmukt told reporters last night after beating Kolkata Knight Riders by seven wickets.

The 20-year-old feels the Daredevils have been unlucky on many occasions, failing to finish close matches.

"Even though the confidence of the team was high from the beginning, but we were not able to finish up well and lost some close matches which we should have won. This venue has proved good for us and we hope to carry our good form forward and maintain the winning run in the remainder of the season," said Unmukt who was dropped from the side after first three matches.

On his return, Unmukt made 17 in the game against Pune Warriors while scored a useful 37 in the last match. The Delhi lad shared a 95-run stand with David Warner to register his side's third win the competition.

"I wanted to stay till the very end with Warner, who was middling the ball very well. Our strategy was to keep rotating the strike and hit the odd boundary, and get closer to the target," he said.

Unmukt said he has been enjoying batting with Warner as the explosive Aussie opener has the ability to adapt to any situation in the game.

"It is always good to bat with Warner. He has done great job so far in the contest. He is able to maintain his role and acclimatize at every position in the game," he said.

Comments
Topics mentioned in this article
Cricket IPL 2013 Unmukt Chand Delhi Daredevils
Get the latest updates on India vs South Africa and check out  Schedule, Results and Live Score. Like us on Facebook or follow us on Twitter for more sports updates. You can also download the NDTV Cricket app for Android or iOS.