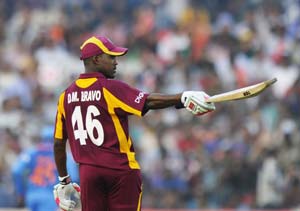 The Sun TV network, owners of the Hyderabad IPL franchise, has retained 20 players but have opted not to renew their relationship with Bravo, reports CMC.

Bravo, who did not play with the franchise in the 2012 IPL, opted to play in the Test series against England for the West Indies.

He is among a host of players released by the various franchises.

However, there are seven players from the West Indies in the 2013 IPL.

They include Kieron Pollard, who stays with the Mumbai Indians, Dwayne Bravo (Chennai Super Kings) and Sunil Narine with the defending champions Kolkata Knight Riders.

Making a return to the IPL is Trinidad and Tobago all-rounder Kevon Cooper, who was successful with the Rajasthan Royals in the early part of the 2012 season before a knee injury sent him home early.

At the point of his return he was the leading bowler for Rajasthan.

Each franchise has a salary cap of up to $12.5m to spend on their 2013 squad, which can contain a maximum of 33 players, including 11 from overseas.

The trading window opens Nov 19, when teams will be able to sign uncapped Indian players, including the 52 whose contracts were not extended.