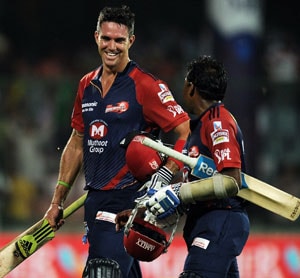 In a blink-and-miss appearance at a press meet in New Delhi on Friday, England and Delhi Daredevils batsman Kevin Pietersen has wagered on the Chennai Super Kings to lift the 2013 Indian Premier League title.

"CSK are a great team and in MS Dhoni they have the best skipper for these conditions," said Pietersen after being launched as a brand ambassador of a leading watch manufacturer.

"In (Ravichandran) Ashwin and Ravindra Jadeja, Chennai have some very good spinners who can take advantage of the turning track at the MA Chidambaram Stadium in Chepauk," he said.

It may have been a fleeting appearance but Pietersen held the audience in rapt attention. "They (Chennai) have the perfect squad in the IPL. Mike Hussey is a superstar and I would bet on the Chennai Super Kings to win this years' title," he added.

Pietersen backed his prediction by slamming the performance of defending champions Kolkata Knight Riders, whom he "expected to challenge Chennai for the title".

"I have been very disappointed with KKR this year. The pitches in Chennai and the Eden Gardens in Kolkata are very similar, but the Knight Riders have not lived up to their billing, despite an abundance of talent," added the 32-year-old.

Moving on to his franchise, the Delhi Daredevils, Pietersen was adamant that the squad was heading in the right direction. "Look, our bad start to the season was more to do with injuries and absentees as opposed to poor performances."

"With Jesse Ryder and myself being ruled out of the tournament, and Virender Sehwag recovering from injury, our bad start was due to external factors. We have put a few wins together and the squad is regaining confidence at the right time," said Pietersen.

Pietersen also had some reassuring words for his Delhi teammates Irfan Pathan and Umesh Yadav, both of whom have suffered from injuries and a loss of form in recent years.

"Irfan and Umesh are great lads who have done well but have been a tad unlucky. Umesh, in particular is an exceptional talent and has added the slower ball to his repertoire. I would like both of them to be selected in to the Indian squad for the Champions Trophy," said Pietersen of the two India team hopefuls.

Never one to shy away from an opinion KP also had his say on the poor form showcased by legends Sachin Tendulkar and Ricky Ponting in IPL 6.

"Look it's difficult for seniors to play Twenty20 tournaments. Especially for someone like Ricky who has been away from international cricket for a few months. But despite their performances you have to say the IPL wouldn't be the same without them," concluded the England maverick.