When the two sides met earlier this season in Chennai, Dhoni kept his cool to pull off a thrilling five-wicket win. But Hyderabad, with five wins from as many games at home, will look to extend their dominance in what has become their fortress, as they chase a playoff berth. 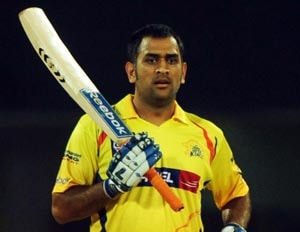 As the league phase of the Indian Premier League 2013 moves into its final stages, the scramble for playoff spots has become more intense, and the Sunrisers Hyderabad, currently on 14 points with three other teams, cannot afford a slip up when they host Chennai Super Kings in Hyderabad on Wednesday (May 8).

Regarded as underdogs before the tournament began, Hyderabad have made unexpected strides to the top half of the table. They have their bowling attack, the best in the tournament, to thank for their current position. The same, however, cannot be said about their batting line-up which has let the team down on several occasions. However, the arrival of Darren Sammy, who has adapted well to the conditions, and the in-form Shikhar Dhawan has buoyed Hyderabad's batting.

If Kumar Sangakkara, the designated captain, who has had a dismal run in the tournament so far, finds his form it will add a new dimension to Hyderabad's struggling batting unit. Hyderabad's frontline bowlers - Dale Steyn, Ishant Sharma and Amit Mishra - have complemented each well to make up for the lapses by their batsmen.

While Mishra, with a tally of 17 wickets from 11 matches, has been the leading wicket-taker of the side, the miserly Karan Sharma - who has an economy rate of 5.59 - has been a revelation. With support acts from Sammy and Thisara Perera, Hyderabad have been able to restrict the opposition to below 120, the average score at the Rajiv Gandhi International Stadium. And the bowlers will be expected to do the job once more, against the formidable Chennai batting.

Chennai, who have nine wins from 12 games, are almost certain of a playoff spot, barring major upheavals. But there will be no lowering of guard against Hyderabad, who have sprung some surprises each time. Chennai had been in ominous form until their seven-match winning streak was snapped by Mumbai Indians on Sunday (May 5). Smarting from the 60-run defeat to Mumbai, Chennai will look to bounce back and cement their position at the top of the table.

Though Chennai have been provided good starts by Michael Hussey and Suresh Raina, a lot will be expected from Murali Vijay, who returned from injury in the previous game but has only fired in fits and starts. MS Dhoni, who is in tremendous form, has played the finisher's role with able support from Ravindra Jadeja and Dwayne Bravo.

An off-day for the batting unit - as it happened against Mumbai - would mean the bowlers will have to step up. Albie Morkel's recovery from injury will undoubtedly boost the side considering Dirk Nannes hasn't been anywhere near his best and Ben Laughlin conceded runs aplenty in the only game that he played. Chris Morris, R Ashwin, Bravo and Jadeja have played their part to perfection with Mohit Sharma, the Haryana pacer, also chipping in effectively.

When the two sides met earlier this season in Chennai, Dhoni kept his cool to pull off a thrilling five-wicket win. But Hyderabad, with five wins from as many games at home, will look to extend their dominance in what has become their fortress, as they chase a playoff berth.