BCCI suspends Amit Singh, after cops say he was used by bookies to fix deals

Gujarat's Ranji Trophy pacer Amit Singh was nabbed by the police in the spot-fixing scandal that rocked the Indian Premier League. Singh had made his IPL debut in 2009 under Shane Warne's captaincy 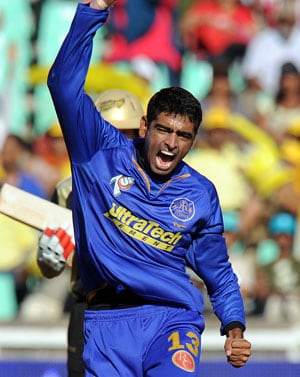 The Board of Control for Cricket in India has suspended Amit Singh for his alleged involvement in spot-fixing. In a press release on Friday, the Board said the Gujarat bowler has been suspended, pending inquiry.

Among the 14 people arrested on Thursday in the massive spot-fixing scandal that has rocked the Indian Premier League, was Singh. This former Rajsathan Royals player is accused by the police of being the "talent-spotter" for the bookies.

In his press conference yesterday, Delhi Police chief Neeraj Kumar had indicated the presence of middlemen in fixing deals. In the police's books, Singh's name figures as Amit Kumar.

Singh, who has played for the Royals in four editions of the game, allegedly used his access to his former teammates to play middleman and approach them for spot-fixing. Police sources said he got in touch with players on behalf of a bookie named Chandresh, who has also been arrested.

In a big swoop on Thursday, the special cell of the Delhi Police arrested three Rajasthan Royals players, among them Test cricketer S Sreesanth, for alleged spot-fixing in three different matches since last week. Police sources said they are also looking closely at 15 other matches. The alleged role of Singh as the go-between is suspected to be crucial, the sources say.

Born in Bidar (Karnataka) Singh, 31, has played the prestigious domestic tournament, Ranji Trophy, for Gujarat. He made his IPL debut under Shane Warne against Kings XI Punjab in 2009, where he had impressive figures of 3 for 9 from his four overs.

However, he was banned last year from bowling because of a suspect bowling action and played his last IPL match in May 2012.

Interestingly, his being dropped paved the way for bowlers Sreesanth and West Indian Fidel Edwards to win contracts with Rajasthan Royals this season.

In phone transcripts that the Delhi Police released on Thursday, Singh allegedly asks Ajit Chandila, one of the Royals players arrested, how he will signal the beginning of a fixed over. "I will pull both my T-shirts up and down and will then look up before starting the over," Chandila purportedly says.

The police alleged that at a May 5 match against the Pune Warriors, Chandila failed to signal the over, but duly gave away 13 runs in it as fixed. The bookies, they alleged, could not place bets and this led to an argument between the player and bookies. Chandila had to return the Rs 20 lakh advance that he had allegedly been given, the police said.

Comments
Topics mentioned in this article
Cricket IPL 2013 BCCI Ankeet Chavan Sreesanth Amit Singh
Get the latest updates on ICC T20 Worldcup 2022 and CWG 2022 check out the Schedule, Live Score and Medals Tally. Like us on Facebook or follow us on Twitter for more sports updates. You can also download the NDTV Cricket app for Android or iOS.