Before going into the 1st ODI, nothing suggested that India could be beaten -- let alone thrashed by 124 runs -- but not because the West Indies are a bad ODI side. The suspicion was the motivation levels of the visitors could not have been high after their players threatened pull-out of the series over a payment dispute with their Board. 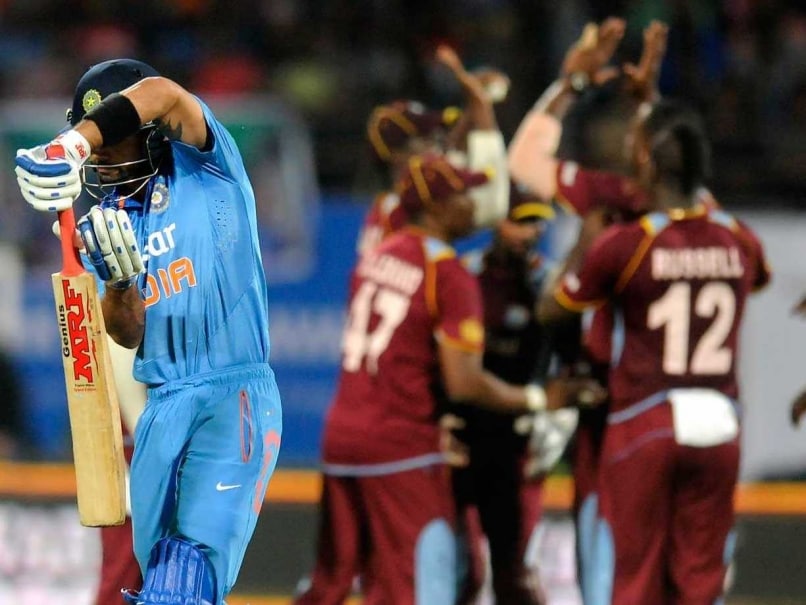 Virat Kohli makes his way back after yet another disappointing performance. He scored 2 against West Indies in the 1st ODI.© BCCI

All those who believe that India's best suit in cricket are the shorter formats, may have been shell-shocked watching the World Champions lose the first of their five One-Day Internationals (ODI) against the West Indies, that too in their backyard. (Also read: Ishant Sharma replaces injured Mohit Sharma for India vs West Indies ODIs)

Before going into the match nothing suggested that India could be beaten -- let alone thrashed by 124 runs -- but not because the West Indies are a bad ODI side. The suspicion was the motivation levels of the visitors could not have been high after their players threatened pull-out of the series over a payment dispute with their Board. (Rohit Sharma wants opener's slot back, says he is happy to fight for it)

Had the West Indies resorted to trade union tactics and refused to take the field at Kochi Wednesday, the person who would have been hugely embarrassed was Narayanaswami Srinivasan who as chairman of the International Cricket Council (ICC) worked out the new deal for all the member countries along with Cricket Australia (CA) and England and Wales Cricket Board (ECB).

As suspected, the Indian board (read Srinivasan) intervened and the trade union tactics of West Indies captain Dwayne Bravo were stopped in the tracks. Obviously, the players wanted to prove the point to their board that they deserved all that they are demanding by playing the match as if they were possessed. (Did BCCI orchestrate Sunil Narine's exit?)

Like India, the West Indies also fancy their chances in 50 and 20 overs cricket. Yet for a team that won the first 25 of the 30 matches against India in the 1980s, they slipped badly in the subsequent decades and are now 59-50 head-to-head.

Since 2011, the year of the last World Cup, India beat them in 12 of the 18 matches and that's good enough reason for people to believe that India will not lose. They may still not lose the series but skipper Mahendra Singh Dhoni's promised experiments ahead of the 2015 World Cup in the Antipodes may have to be put on hold as their prime concern now is to win the series and make sure the batsmen get back into form. They will have to rework their strategy.

Dhoni's first experiment should have been, for a change, to bat first on winning the toss. Also why did he develop cold feet while selecting the playing eleven in not blooding teenager Kuldeep Yadav. He could have seen how the left-armer's googly and Chinaman would work against the visiting batsmen.

All those who thought it would be a cakewalk are talking of changes in the eleven. The defeat could have been a lot worse had it not been for a defiant 42-run last-wicket stand between Ravindra Jadeja and Mohammed Shami.

The teams cannot be changed in a knee-jerk reaction to a defeat. The simple fact is that India lost the plot in the field and were clueless as Marlon Samuels and Denesh Ramdin hammered the attack in a match-winning stand.

A remarkable coincidence, India's worst defeat against the Caribbean at home by 135 runs came in 2002 at Vijayawada and the architect of that victory was also Marlon Samuels, who made 108 off 75 balls. Then the target was 316. This time it was 321 and Samuels scored his highest ODI score.

In the first 20 overs there was little to choose between the teams except that India lost two wickets, one more than the visitors. You can't be chasing a 321-run target with only four batsmen getting into double figures and only three of those crossing 20.

All the top order batsmen save Shikhar Dhawan failed to come good and unfortunately he was responsible for triggering the collapse by senselessly getting his opening partner Ajinkya Rahane run out when the two dug in with careful batting.

Which one of these top-order batsmen could be dropped after one failure unless Kohli's miserable showing in England is held against him? Even Ambati Rayudu seemed to have cemented his place on England tour. Here a word about Rohit Sharma who is out with an injury. He has been the most consistent run-getter against the West Indies since 2011 and won most of the matches for India.

On paper, the West Indies look much stronger with depth in batting and the luxury of playing five bowlers, including a genuine spinner. India played two spinners with Ravindra Jadeja, the man who bowled the most overs in ODIs this year. Playing leggie Amit Mishra backfired, but then he is coming back after a long injury lay-off.

Frankly, it is the batting that has let the team down. The batsmen came good any number of times chasing 300-plus score in recent years. Imagine the same side hammered the West Indies for 418 in December 2011 to win the match by 153 runs at Indore, which curiously did not get another international game after that. But then Virender Sehwag was there and he struck a double century (219) there.

Comments
Topics mentioned in this article
India Cricket Team West Indies Cricket Team India vs West Indies, 2014-15 Cricket
Get the latest updates on ICC T20 Worldcup 2022, check out the Schedule and Live Score. Like us on Facebook or follow us on Twitter for more sports updates. You can also download the NDTV Cricket app for Android or iOS.