India went on to to lose the second ODI against the West Indies by 2 wickets on Sunday but their batsman Virat Kohli, Shikhar Dhawan and MS Dhoni had statistical highs to show forth. Here are the stat highlights from the game at Vizag: 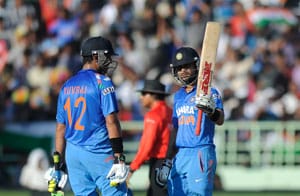 India went on to to lose the second ODI against the West Indies by 2 wickets on Sunday but their batsman Virat Kohli, Shikhar Dhawan and MS Dhoni had statistical highs to show forth. Here are the stat highlights from the game at Vizag: (2nd ODI, as it happened)

# After winning four games in succession, India have lost their first ODI at this venue.

# West Indies' aforesaid total is their second highest successful chase against India in ODIs, next only to the 291 for five at Vadodara on November 18, 2002.

# Overall, West Indies' 289 for eight is their fourth highest successful chase in ODIs.

# For the second time, four fifties have been registered in West Indies' innings - the first instance being vs England at Kingstown on March 2, 1994.

# Shikhar Dhawan has completed his 1,000 runs this year in ODIs - a feat achieved by him for the first time in a calendar year.

# Kohli's 28th fifty in ODIs is his seventh vs West Indies.

# Kohli has recorded an average of 60.00 for the first time vs West Indies in ODIs - his tally being 900 in seventeen innings, including two hundreds.

# Kohli is the only one to have recorded an average of sixty in India-West Indies ODIs.

# Kohli has been dismissed in the nervous nineties three times in ODIs - 99 and 94 vs West Indies and 91 vs Bangladesh.

# Kohli is the second Indian batsmen to register 99 vs West Indies in ODIs - the first being VVS Laxman at Nagpur on November 9, 2002.

# Of the eight instances of 99 by Indian batsmen in ODIs, Sachin Tendulkar has provided three - one each vs South Africa, England and Pakistan. 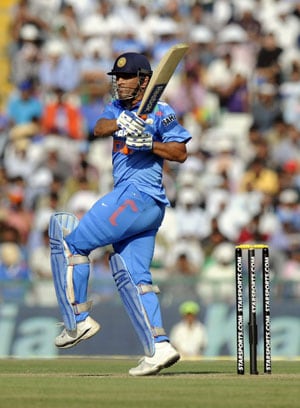 # Dhoni has posted his 50th fifty in ODIs - his fourth vs West Indies.

# Amongst the captains with 5000 runs or more in ODIs, Dhoni is the only one to manage an average of fifty-plus. His strike rate of 86.16 is also the highest.

# Ravi Rampaul (4/60) has captured four wickets or more in an innings four times vs India in ODIs.

# Sunil Narine's overall average in ODIs is 25.57 as compared to his average of 59.50 vs India.Â  He could capture just six wickets in eight games vs India.

# Kieran Powell (59 off 70 balls) has posted his first fifty vs India - his fourth in ODIs.

# Lendl Simmons (62 off 74 balls) has registered his fourth fifty vs India - his 13th in ODIs.Â  He is the first West Indian batsman to post two fifties at Dr. Y.S. Rajasekhara Reddy ACA-VDCA Cricket Stadium, Visakhapatnam,

# Sammy's aforesaid innings is his highest in a losing cause in ODIs.

# Sammy's second fifty vs India is his sixth in ODIs.Â  The said innings is his second highest in ODIs, next only to the 84 off 50 balls vs Australia at Gros Islet on March 25, 2012.

# Sammy's first Man of the Match award vs India is his fourth in ODIs.

# Narine's second duck vs India is his sixth in ODIs.

Comments
Topics mentioned in this article
Cricket Yuvraj Singh Virat Kohli MS Dhoni Suresh Raina West Indies Tri Series 2013 India vs West Indies 2013-14
Get the latest updates on Fifa Worldcup 2022 and check out  Fifa World Cup Schedule, Stats and Live Cricket Score. Like us on Facebook or follow us on Twitter for more sports updates. You can also download the NDTV Cricket app for Android or iOS.