Rohit Sharma, who missed making his Test debut narrowly three years ago in Nagpur when he picked up a freak ankle injury half an hour before the start of the game, made a sparkling unbeaten 127 to rescue India from a precarious 83 for 5 to take to 354 for 6 on day 2 in reply to Windies first innings total of 234 all out. 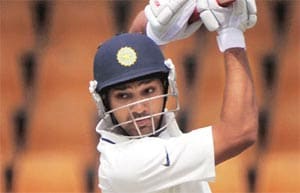 Ex-India batsman and former Mumbai Ranji Trophy coach Pravin Amre sees shades of swashbuckling cricketer Virender Sehwag in Rohit Sharma, who on Thursday slammed a maiden unbeaten Test ton on debut against the West Indies in the opening match of the two-game series in Kolkata.

"Personally I believe he has got talent like Virender Sehwag. Sehwag also came up with the reputation of a shorter format player. If you see his record, it is phenomenal when it comes to the Test. Rohit is also (of) the same character.

"Because he has got that many strokes. If they spend 2-3 sessions, then they have to get a 100 in any format," Amre told PTI.

Sharma, who missed making his Test debut narrowly three years ago in Nagpur when he picked up a freak ankle injury half an hour before the start of the game, made a sparkling unbeaten 127 to rescue India from a precarious 83 for 5 to take to 354 for 6 on day 2 in reply to Windies first innings total of 234 all out.

Amre, who himself scored a century on debut against a formidable South Africa pace attack at Durban in 1992-93, said the 26-year-old Sharma has adjusted well to the different positions he comes in to bat.

"Over the last 8 years he has been playing first class cricket and I think he always batted in the middle order. I think the way he shifted to the opener's position (in ODIs), that was a special thing.

"It wasn't easy because he started opening in England, and there conditions were not easy for an opener. There I think he adopted very well. He took his time and that was a different Rohit we saw because that was the role needed and he fit in that role," Amre added.

"His role was to build partnership. When a senior player like (captain Mahendra Singh) Dhoni was there, he (Sharma) hung in there while Dhoni played the role of an aggressor and he was supporting him. Once Dhoni got out, he became aggressive and converted that partnership, which counted in this particular Test," the 45-year old said. Sharma and Ravichandran Ashwin (92 not out) had put on 198 runs for the unbroken seventh wicket when stumps were drawn.

Amre felt the Mumbai batsman has matured as a cricketer and had worked hard after losing his place in the team before the 2011 World Cup, thus missing out on a golden chance to become a member of the triumphant Dhoni-led squad.

"In cricket you learn by experience and your own experience is the best master. I think losing the World Cup spot made him learn his lesson. Like how he has to be responsible and focused.

"When he lost his place from the Indian team, that was a learning thing and he took it positively, because from there on he worked on his fitness and many other things. He became a matured cricketer and we see a different Rohit now." Amre added that Sharma, who led Mumbai Indians to the IPL and Champions League T20 titles, should now focus on his

batting than on captaincy. "There is still time (for captaincy). Dhoni is still around. He (Sharma) is not settled 100 per cent. He should focus on batting rather than captaincy now," he said.