Our last win showed we can beat India in India, says Dwayne Bravo

Dwayne Bravo conceded that it will take something "special" from the Caribbean side to beat the Indians in two consecutive matches at home. 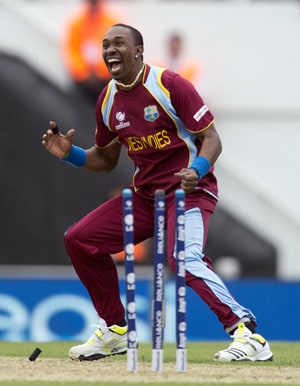 The series-levelling win in the second ODI at Visakhapatnam gave a struggling West Indies the self belief that they can beat India at their own backyard, the visiting team skipper Dwayne Bravo said here on Tuesday.

After the six-wicket loss to India in the first ODI at Kochi, West Indies pulled off a narrow two-wicket victory against the hosts in the next match to liven up the three-match rubber.

"Winning the last game gave us the confidence and the belief that we can actually beat India in India," Bravo said on the eve of the third and deciding ODI at the Green Park stadium, which would be hosting a international match after nearly four years.

"From our point of view, we are just focused on improving on our previous performances and try to play together as a team more consistently. In the last five encounters we've had with India in ODIs, we've won two and lost three.

"So, tomorrow's game will be very important to get even and of course win the series," said the West Indies captain.

Bravo conceded that it will take something "special" from the Caribbean side to beat the Indians in two consecutive matches at home.

"The Indian team will come back hard after the hurtful loss and since it's a day game, it will be very hot and humid. It's not going to be easy but I will keep reminding the team of the importance of beating the number one team in the world," he said.

The West Indies skipper said execution of plans is very important to win matches and they were focusing to do that tomorrow.

"Before the last match we had a very good team meeting -it was very interactive and thorough. In all meetings we formulate our plans but never really executed them on the field, which we did well the other day. I will remind the guys of the good things we did in that match and encourage them to repeat them tomorrow," Bravo said.

The batting performance of West Indies in second ODI was a huge improvement from their previous matches on this tour, but none of the visiting team batsman has been able to play a big knock so far. But Bravo said it was not a concern for him as long as his batsmen were contributing to team's success.

"It is good they are getting starts, some of us are not even getting them. It is good for us as a team that some guys are getting fifties and building partnerships to put the team in winning situation. Rather than one person scoring a hundred and we losing the match, if four or five half-centuries can win us matches, I will take that any day," he said.

Bravo, however, wants his batsmen to learn from their Indian counterparts on how to convert starts into big scores.

"I encourage the young West Indies batsmen to learn from the Indian batsmen, particularly inculcate their appetite for runs. I want guys like Darren Bravo, Kieran Powell and Johnson Charles to learn from the likes of Virat Kohli, Rohit Sharma and Shikhar Dhawan," he said.

Darren Sammy, who was the man-of-the-match in Visakhapatnam for his match-winning unbeaten 63, has always been under scrutiny. Considered as a bits-and-pieces cricketer, Sammy's place in the West Indies team has often been questioned by the media and cricket pundits.

But Bravo backed the all-rounder and termed him as a "match-winner" for West Indies.

"The talks are on in media and outside that Sammy should not be part of team but for us he is a big part of our team. As captain, he is an important player for me, especially with likes of Kieron Pollard and Chris Gayle out," he said.

"He is a main player in our side and will be an asset as long as he plays. If he is out of form, it's important for us as a team to give him all support and continue to encourage him because he is a match-winner on his day. He showed that in the last game. He also brings in a positive vibe in the dressing room and I would always want someone like him around at all times," Bravo said of the West Indies Test captain.

"I am happy to have two good spinners at my disposal in Sunil Narine and Veerasammy Permaul in Indian conditions. Tomorrow, it being a day game, they will play an even bigger role," he said.

Comments
Topics mentioned in this article
Cricket Dwayne Bravo West Indies Tri Series 2013 West Indies Cricket Team India Cricket Team India vs West Indies 2013-14
Get the latest updates on Fifa Worldcup 2022 and check out  Fifa World Cup Schedule, Stats and Live Cricket Score. Like us on Facebook or follow us on Twitter for more sports updates. You can also download the NDTV Cricket app for Android or iOS.