Meet a fan who saw Sachin's 1st Test match at Wankhede, but now he can only hear

Suhas Marathe kept score for All India Radio when Sachin Tendulkar played his first Test match at Wankhede Stadium in February 1993. Today, he is blind and will have to follow the score on TV, but his heart will still be at the ground. 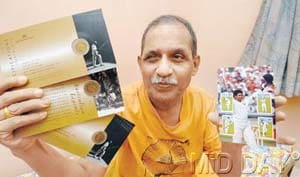 Twenty years ago, Thane-based Suhas Marathe made his way to the Wankhede Stadium's All India Radio box to perform the role of a scorer for the Marathi commentators in the February 19 to 23, 1993 India vs England Test match.

Then, he could see. Now, he can't. Marathe, a cricket statistician among other things, is a victim of the worse type of glaucoma in his right eye. He doesn't know when he lost his vision in his left.

He is proud that he did scoring in Tendulkar's first Test on his home ground. At the opposite end of destiny is his inability to watch the batsman take the field in his 200th and final Test today.

"Yes, I am disappointed. After all, I have watched him play so many great innings on television. I even attended a function as part of a member of the Association of Cricket Statisticians and Scorers of India (ASCCI), when we felicitated him and Vinod Kambli for their 664-run world record partnership in 1988. Of course, I watched his 78 in that 1993 Test match through my scoring assignment, which was made possible by Sudhir Vaidya."

Marathe (62) could watch television without discomfort till 1999, a period which coincided with the great Indian's peak. He does not seek sympathy. "When all my operations failed, I said to my wife Sucheta that I will accept my handicap and continue to enjoy life. I love cricket, philately and old Hindi music."

"One should face reality and introspect. Remember, a white line on a black stone is clear as daylight." Today, he cannot watch Tendulkar's farewell, but will be in front of his television set well before start of play, and hear the commentators describe the key moments.

Asked how well do television commentators serve his purpose, he exclaims, "They have been superb. All of them! Sure, I cannot see, but thanks to them, I can visualise how Tendulkar has played a particular shot. I love to hear how he executes a straight drive or displays rock-solid defence. The commentators have served me well. I particularly liked Greg Chappell, but he doesn't do commentary anymore. His brother Ian is my favourite. He is most impartial - always talking about what the players should be doing when confronted with a challenge. He does not get over-excited or disheartened. Geoff Boycott is good too. So is Nasser Hussain; and I like Alan Wilkins as well."

Marathe can't wait for a copy of the Sachin Tendulkar stamp to be released during the Test match at Wankhede. "In my philately hobby, I concentrate on films, cricket and railways. All new stamps issued by our postal department come to me, since I subscribe to them. The first Indian cricketer on an Indian stamp means history is being made. I am delighted," said Marathe, who served Central Railway as an Office Superintendent, before his loss of sight forced him to retire in 2002 - a good 10 years before time.

The Tendulkar stamp will occupy pride of place in the Marathe residence at Thane, but the Wisden Cricket Monthly that has a cover image of Tendulkar being run out in the Durban Test against South Africa in 1992 is a prized possession, because Tendulkar was the first cricketer to be dismissed through a television replay verdict. "I eat, drink and sleep cricket statistics. Sucheta reads to me all the statistical items from the newspapers and magazines. I am now going to enjoy Tendulkar's final Test. All his feats are amazing. Yes, records are meant to be broken, but I feel the one Tendulkar mark that won't be surpassed is his 51 Test centuries. I don't think any batsman can score so many hundreds," he said.